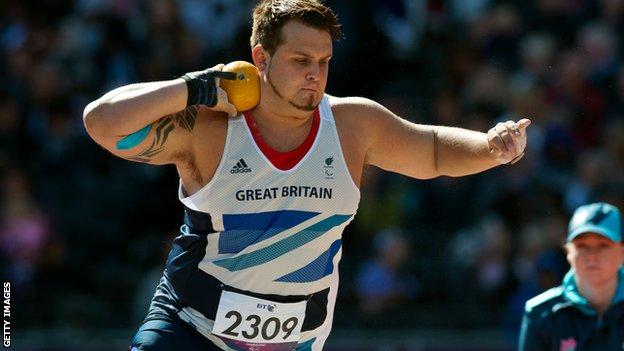 The 22-year-old from Bridgend is the world number one and has not lost a competition he has entered this season.

"I know it's going to be tough because I am the one to beat, but I am excited because the world is going to see a different athlete this year," he said ahead of the event later this month.

Davies will again double up to compete in the discus and shot at the World Championships, staged between 19 and 28 July at Stadium Parilly.

He then won a gold medal in the F42 discus at the Olympic Stadium with a winning throw of 46.14m.

Davies, who was awarded the MBE for his achievements in London, has thrown further in both disciplines this season and is confident he can build on his success at the last Paralympics.

"I am really excited going into the world championships now," he said.

"It's different to London because I didn't know what I was capable of.

"I knew I wanted to do well and I had ridiculous aspirations of coming home with a gold medal at my first games and I pulled it off.

"Going into Lyon, I know what I am capable of doing. I am in phenomenal form and I know there is a big throw in the tank.

"I feel like I am going to unleash some big throws now in the World Championships in France.

"I won't be taking any prisoners and I am hoping I won't be making the competition as close as it was in London.

"There is a fine line between confidence and arrogance, but I am very confident coming off the back of London."