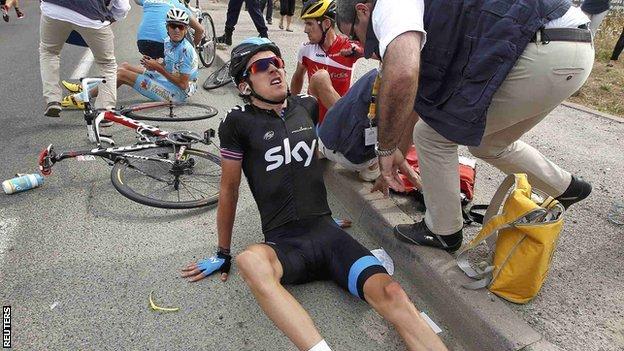 Team Sky rider Geraint Thomas will continue to compete in the Tour de France despite suffering a small fracture in his pelvis.

Thomas crashed towards the end of the 213km opening stage from Porto-Vecchio to Bastia in Corsica on Saturday.

An X-ray showed no serious damage but he struggled on the second stage, finishing 17 minutes and 35 seconds down on the leaders.

Further scans then showed a small fracture, but Thomas will battle on.

He finished the 156km second stage 196th out of 198, leaving him in last place in the general classification.

The drama on the first day happened after a bus became trapped on the finish line moments before the riders were scheduled to arrive.

Orica GreenEdge's team bus got stuck under the overhead banner of the finish line as a speeding peloton was approaching.

The incident caused mayhem as the finish line was temporarily moved back 3km, before being restored to its original spot once the bus was moved.

The closing 30 kilometres were marked by a series of crashes on the narrow roads leading in to Bastia.

Spain's Alberto Contador, considered by many to be the main challenger to race favourite Chris Froome, was the highest-profile name to fall as he went to ground in a mass crash that also took out Slovakia's promising sprinter Peter Sagan.

Double Olympic track cycling gold medallist Thomas was expected especially in the mountain stages. His continued presense in the race is now in severe doubt.

Froome is seeking to emulate Sir Bradley Wiggins, who last year became the first Briton to win the Tour de France but has been forced out of the 2013 race because of injury and illness.

"It's been quite a warning today. I don't think any of us thought it would be plain sailing today," Froome said.

"But there were some pretty brutal crashes at the end there and it was just a reminder that this Tour is about much more than having the form and being here - it's about staying out of trouble too.

Germany's Marcel Kittel edged out his rivals to win the opening stage in a sprint finish.

The Argos rider pipped Norwegian Alexander Kristoff a few metres from the line, while Danny Van Poppel of the Vacansoleil team came in third.

Sunday's second stage runs for 156km across Corsica from Bastia to Ajaccio.