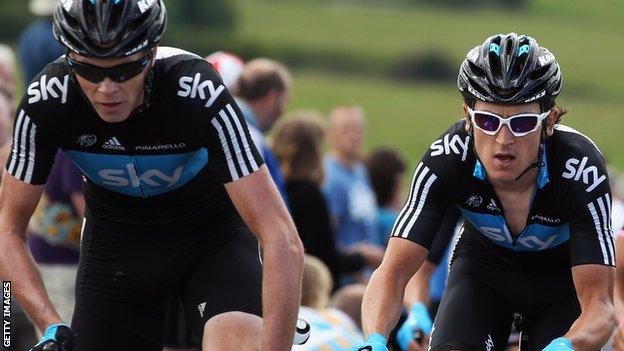 Geraint Thomas says he is ready to play his part in assisting Chris Froome's bid to win the Tour de France.

Froome will lead the nine man Team Sky squad as team-mate Sir Bradley Wiggins, who won the 2012 title, is unfit to race.

And Thomas believes Froome, who finished second to Wiggins last year, can win the 100th edition of the race

"If we could end up on the Champs-Elysees with that [yellow] jersey, it would be incredible," Thomas said.

"Even though he's the one that stands on that podium and gets that pay rise and everything with it, we all get a lot of satisfaction from that knowing the amount everyone's committed to that one goal."

Thomas, who opted out of last year's event to concentrate on the Olympics, says Froome is capable of becoming the second British winner of Le Tour after Wiggins.

"He's definitely got a great chance of winning. I think he's proved that this year," Thomas added.

"We definitely have a lot of confidence in him and in each other as well.

"We've done a lot of racing now and we all know each other's strengths.

"I think versatility is quite a key part of our team in the way a lot of us can on the flats or in the climbs as well.

"As long as we communicate together and keep racing as we have done in the last couple of years, I'm sure we'll be definitely in with a shout."

Welshman Thomas is mindful Froome and Team Sky face fierce competition and has identified Spain's Alberto Contador, who has won the race three times, as the main rival.

This year's Tour will be the 30-year-old Spaniard's first since returning from a ban for a doping violation that saw him stripped of his win in 2010.

"He's won this race a few times in the past and he's won numerous grand tours," Thomas said.

"He's got a strong team around him as well so he's definitely one of the key rivals.

"There's obviously quite a few other good teams but I would have to say the biggest threat would be him [Contador]."