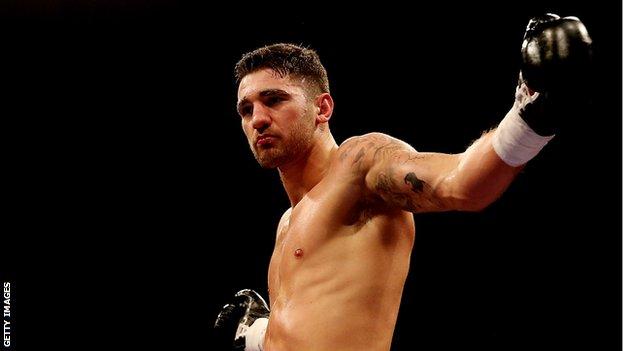 Cleverly will attempt to defend his title for a sixth time against an as yet unnamed opponent on 17 August.

"I know he's the real deal and know what he's capable of and I think deep down so do these other fighters," Warren said.

"I think that's why we get these little swerves every now and then.

"I don't think Nathan gets the credit he should for what he's done. He's had some great wins.

We were quite close to agreeing something, then Bernard Hopkins for some reason went very cold on it

"He's been unlucky as well with a couple of injuries last year which held him up a bit."

Warren admits he has been "annoyed" in his attempts to arrange a big-name opponent for Cleverly.

Froch retained his IBF super-middleweight crown with a win on points over Mikkel Kessler at London's O2 Arena in May.

Cleverly, who retained his WBO title against Robin Krasniqi in April, has previously targeted an all-British bout against Froch.

"We offered him [Froch] £2.5m to fight Nathan, for Nathan's title in a catch-weight fight so it wasn't at Nathan's weight," Warren said.

"Nathan would come down a bit in weight.

"And he [Froch] turned it down and he starts slagging him off.

"You look at who he was fighting at the age of 26. Go and look at the records and compare the records."

Although an opponent has still to be named for the Welshman's next fight on 17 August at Cardiff's Motorpoint Arena, Warren is currently negotiating with Russian Sergey Kovalev.

Warren also claimed he had been in talks with the promoter of IBF light-heavyweight champion Bernard Hopkins and had been close to a deal.

"I had been talking last week with Richard Schaefer [Hopkins' promoter] and I think we weren't far off," Warren added.

"We were quite close to agreeing something, then Bernard Hopkins for some reason went very cold on it.

"But Bernard did that before with Joe [Calzaghe]. I thought we made the fight with Joe at least three or four years before Joe finally fought him."