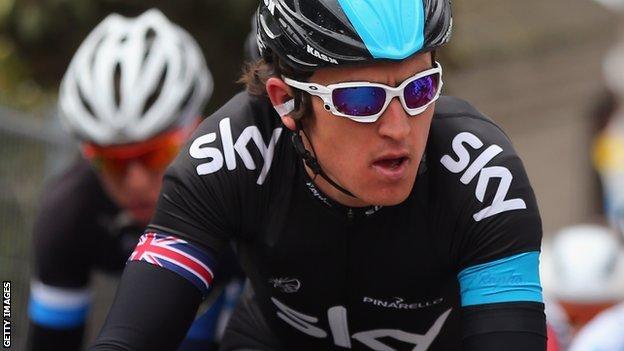 Geraint Thomas believes he can make a significant contribution in the mountains if selected by Team Sky for the 2013 Tour de France.

The Tour, celebrating its centenary, runs from 29 June to 21 July.

The Welsh cyclist is pleased with the form he showed in last week's Criterium du Dauphine, helping in the week-long stage race.

"It was really good. I've been working quite a lot on my climbing and trying to lose a bit of weight," Thomas said.

"I really felt I'd moved on in that area last week and could do a decent job for Chris.

"It was great to see him winning and the team doing so well. It's just great to be a part of it all."

We will miss Bradley Wiggins to an extent as well, but we've still got a really strong team and a lot of good guys that can step up and fill his place

Team Sky's Tour de France team will be named early this week and Thomas, who won a second Olympic gold on the track in the team pursuit at London 2012, is expected to be included.

If selected, he expects to play a key role in supporting team leader Froome towards the end of mountain stages.

"I've just got to treat it as if I'm going," he said. "I've got my programme from the coach, so just keep doing everything right and hopefully I'll be lining up on the start line.

"I think it's a bit of a tough one, when it comes to trying to win the Tour overall it pretty much means all for the one guy the whole three weeks.

"I may get lucky, I may have a through role to play at one point in the race, but I think going there the main job for me will be just to look after Chris and do a similar job to what I was doing last week at the Dauphine.

"Obviously after last week morale was really high because everyone was going really well and we had all the results to back it up.

"Expectations have grown since last year's Tour win and the whole team expects to ride well now - everyone feeds off each other."

Wiggins has since been ruled out of the Tour through injury and illness and Thomas says that, although the team will miss him, they will cope.

"It is different and I think we will miss him to an extent as well, but we've still got a really strong team and a lot of good guys that can step up and fill his place," added 26-year-old Thomas.

"It's a shame he won't be there because he's quite a good mate of mine, but that's the way it goes some times.