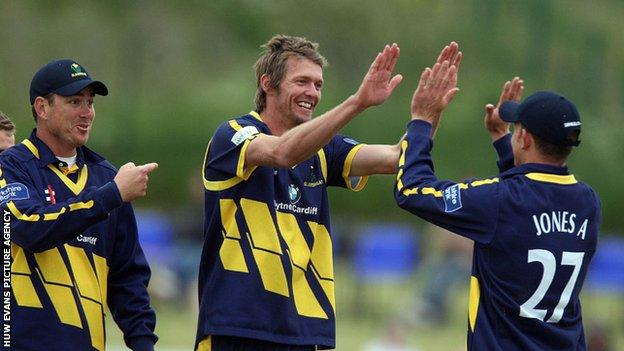 Glamorgan's 85-run win over the Unicorns in Southend was exactly what the team needed, says one-day captain Marcus North.

The Welsh County halted a run of two defeats in the Yorkshire Bank 40 to keep alive their hopes of qualifying for the knock-out stages.

"It's exactly what we needed," said the former Australian Test batsman.

"There's been a couple of disappointing results in this competition so it was nice to come here and play well."

And a tight display by the bowlers meant the Unicorns - who had never previously lost to Glamorgan - were always struggling.

However, only two points separate the top five teams in the Group, with Glamorgan's next match coming against third-placed Leicestershire on Wednesday, 19 June.

"This group is wide open. We knew after that tough result in Somerset we needed to have a good win here," said North.

"[We have to] make sure we have a good win against Leicester next week and if we do that we're sitting in a really good position.

"Most teams are beating each other, so there's no one that's really run away with it so we're right in the hunt."

North came off with a shoulder injury at Southend, but says he will be fit for Glamorgan's LV= County Championship Division Two match against Kent which starts at Canterbury on Wednesday, 12 June.