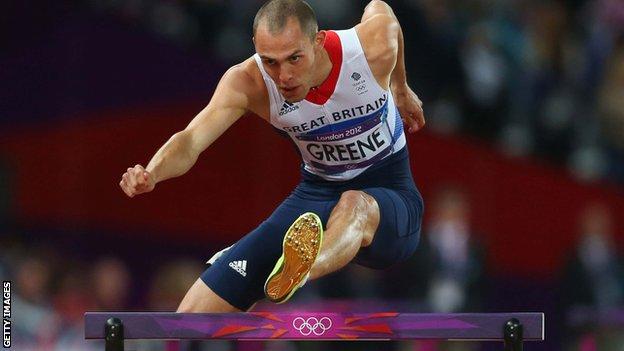 Hurdler Dai Greene says he is ready to defend his title at the World Championships in Moscow in August.

The Welsh 400m athlete is determined to win gold after the disappointment of finishing fourth in the final at London 2012.

Greene, who had a double-hernia operation in March, returns to action at the Rome Diamond League Meeting on Thursday.

"I am the reigning champion and have a title to defend," said Greene.

I am looking forward to Moscow and making amends for what was, at times, a very frustrating last year

"Hopefully, I can go there in better shape than I went to the Olympics last year, put up a really good fight, and come away victorious.

"I was disappointed with the end result at the Olympics but when I look back at the whole year I was very proud of my performances in the way I gave it my best effort.

"I am looking forward to Moscow and making amends for what was, at times, a very frustrating last year."

Greene, who was GB athletics captain for London 2012, underwent a knee operation in the build up to the Olympics and trailed in behind the Dominican Republic's Felix Sanchez.

He says he had a good winter's training before suffering the latest setback of needing a double-hernia operation in March, which sidelined him for a month.

Despite having had only two hurdling sessions on the track since his operation, Greene is adamant he is in a better place physically ahead of the summer.

"This time last year I had done three or four months of training, if that, and that was haphazard training," said Greene.

"Now I have done seven or eight months of training and feel I haven't missed too much. I feel really fit.

"I'm not super sharp, but I have plenty of time to do that before the world champs."

Greene, who has also watched fellow Welshman Rhys Williams lower his personal best to 48.90secs this season, admits he expects a level of rustiness on his return to the track in Rome on Thursday.

"I will probably be a bit rusty over the barriers, but because I am generally fit and healthy I should pull out a good time," said Greene.

"I should start faster than I did last year so I would like to go under 49 seconds."