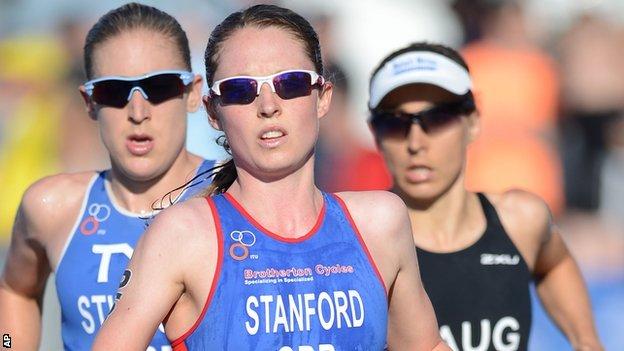 Non Stanford has set her sights on a possible World Triathlon Series top-three finish ahead of the fourth round in Madrid on Saturday.

The 2012 World Junior champion missed World Series races in Auckland and Yokohama, but her San Diego efforts brought a world ranking of 18th.

"This year has been an absolute dream so far," said Stanford, 24.

"Everything's gone beyond my expectations."

The Swansea-based athlete did not compete at the World Series event in Yokohama on the weekend of 11-12 May.

Instead she concentrated on Madrid race preparations, the fourth of eight International Triathlon Union events this year.

She then heads to Alanya, Turkey on Friday, 14 June, for the 2013 European Championships.

Stanford said: "I really didn't expect to be in such great form, but it just shows how hard work and perseverance pays off.

"I'm fully aware that I probably will have a bad race this season… there will be a glitch.

"But it's about how you work through those hard periods and hopefully at the end of the year I'll be able to look back and say it was a successful one.

"At the start of the season I'd have said I would have loved to be ranked top 10.

"But the way things have been going, top five [is a target], or if it keeps going, well, I'd love to finish on the podium and at the end of the year.

"That would be fantastic."

Stimpson, 24, finished fifth as Stanford made her mark in in San Diego.