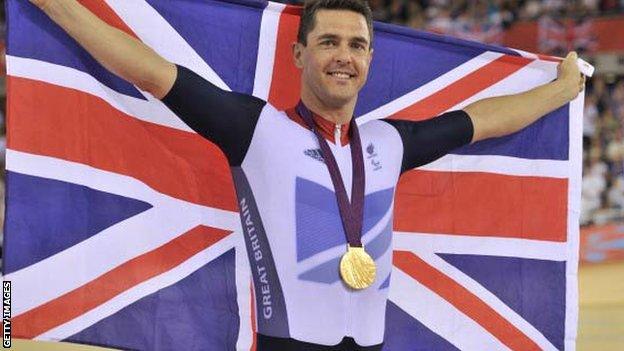 Mark Colbourne is set to compete for the first time since winning gold at the London 2012 Paralympics.

The Welshman has been selected in the 12-strong British team for the UCI Para-cycling Road World Cups in Italy and Spain in June.

"I feel pretty good, feel pretty well and I'm at race weight and I genuinely cannot wait to get out there now and start racing."

Colbourne won three medals on his Paralympic debut, taking gold in the 3km individual pursuit and silver in the kilometre sprint and the road time trial.

His return to action next month, in Italy from 7-9 June and Spain from 14-16 June, is the beginning of the build-up to September's Road World Championships in Canada.

"So now it all starts again. It's three years until the countdown to the Rio Paralympics [in 2016] and hopefully it will be another good road.

"It's about putting the hard work in and reaping the benefits in Rio in 2016."

Beijing Paralympic champion and London bronze medallist Rachel Morris is also selected in the GB team, along with Bridgend's Rhiannon Henry, who will make her cycling debut having won two Paralympic swimming medals.