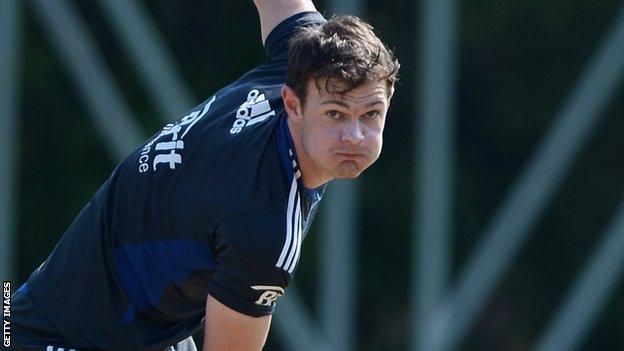 Ex-Glamorgan bowler James Harris believes his move to Middlesex has improved his chances of winning a first England cap.

The 22-year-old has been named in England's 30-man Performance Squad for the summer.

Harris is still uncapped after being called up to England's one-day and T20 squads over the winter but is prepared to bide his time.

"It's another step in the right direction. I'm very pleased," he said.

"It's progress all the time. That's the sort of thing I'm pushing towards and have been for a little while.

"I don't want to put too much of a timeframe on it. Obviously it's a process and as long as I'm getting better every game the end product will come hopefully in time.

"Whether that happens this year, next year or a couple of years down the line, as long as I'm progressing myself then I'll be very happy."

And Swansea-born Harris believes other players may follow his lead in leaving Division Two sides in a bid to improve their chances of being noticed by the England selectors.

"Potentially … that could be a possible trend," Harris told BBC Wales' Sport Wales.

"That wasn't the only factor [for Harris] - there were a few other ones as well.

"Even though the guys from the ECB [England and Wales Cricket Board] when I asked them said it wasn't necessary for me to move I felt for me to progress my game it would be the best course of action.

"But I know the guys at Glamorgan have got ambitions to be a first division club and I've got no doubt they'll get there in the short term hopefully."

Watch a full interview with James Harris on Sport Wales this Friday on BBC Two Wales at 22:00 BST