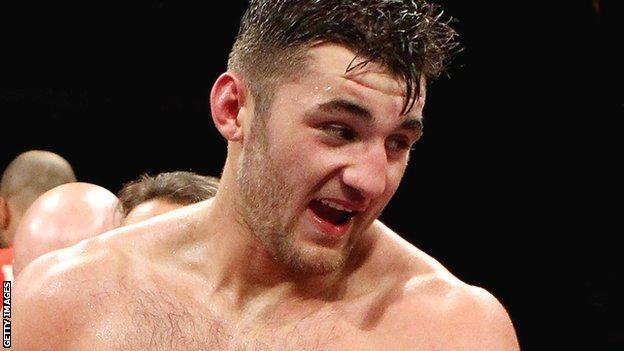 Hopkins, 48, in New York City at the weekend, winning the IBF title and breaking his own record as boxing's oldest ever world champion.

Cleverly faces Robert Krasniqi at Wembley Arena on 20 April and believes a victory over his mandatory challenger will pave the way to face Hopkins.

"A potential fight between myself and Hopkins is inevitable now," he said.

"I think we'll definitely get that fight on and I believe it will be after my next fight.

"Provided I get rid of this Krasniqi now... then I'm convinced that the Hopkins fight will be after that."

Hopkins took full advantage of cutting 31-year-old Cloud above his right eye in the sixth round of their bout in America.

The referee ruled the wound to have been caused by an accidental clash of heads, but replays showed the damage was done by a left hook.

"I thought Hopkins would win the fight on points, I just thought he knew a little too much for Tavoris Cloud and that proved right," said Cleverly, who at 25 is nearly half the American's age.

"Hopkins is just so clever the way he fights. He's 48 years of age but he's exceptionally athletic. His technical boxing ability is brilliant and he caught Tavoris Cloud very flat-footed.

"It was a real good performance from Bernard Hopkins and I'm glad he won the fight because it hypes up a fight between himself and me in the very near future."

Cleverly's fight against Krasniqi on 20 April will be the headline bout at Wembley Arena.

London star Kevin Mitchell makes his comeback on the show in a 10-round lightweight contest as he targets a third opportunity at a world title.

Heavyweight Dereck Chisora will make his long-awaited return to the ring, subject to regaining his British Boxing Board of Control license.

Cromer star Liam Walsh will also feature on the card in a defence of his Commonwealth super-featherweight title.

A further major championship title fight will be added to the card, with details to follow shortly.