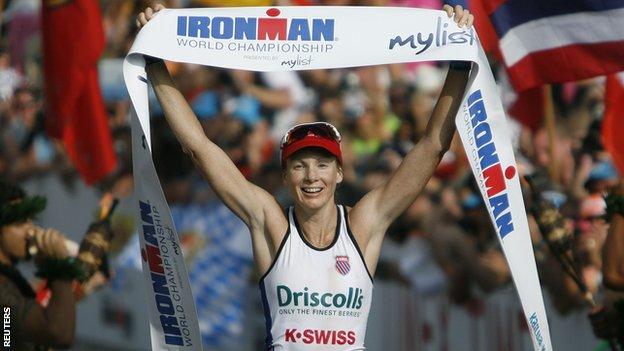 Leanda Cave, the 2012 Ironman and Half-Ironman world champion, has been diagnosed with skin cancer.

The 34-year-old Welsh athlete made the announcement on her Twitter account on Thursday, saying: "I was just diagnosed with a skin cancer this morning."

She added it was not life-threatening and urged people to wear hats and sunscreen.

In 2012, Cave became the first female athlete to win both Ironman and Half-Ironman world titles in the same year.

Born in England, Cave chose to represent Wales and won a silver medal in the triathlon at the 2002 Commonwealth Games.

She also won silver for Great Britain at the European Championships and was also crowned triathlon World Champion that year in Mexico.

Cave, who lives and trains in the United States, made the leap from the 32-mile Olympic triathlon distance to the 70.3 miles of the Half-Ironman and the 140.6 of the full Ironman in 2006.

She told her followers on social media: "The skin cancer I have is not serious or life threatening at all.

"It is a direct result of too much sun exposure. I just want to make people aware of the damage the sun can do. I would love to see all kids wearing hats and sun screen. It will save them from problems down the line."

Skin cancer is the most common type of cancer among white or Caucasian populations, in the UK and worldwide. Most are easy to treat and pose only a small threat to life, but one type, malignant melanoma, is difficult to treat unless detected early.

Triathletes are said to have an increased risk of skin cancer because of the long hours of exposure to the sun.