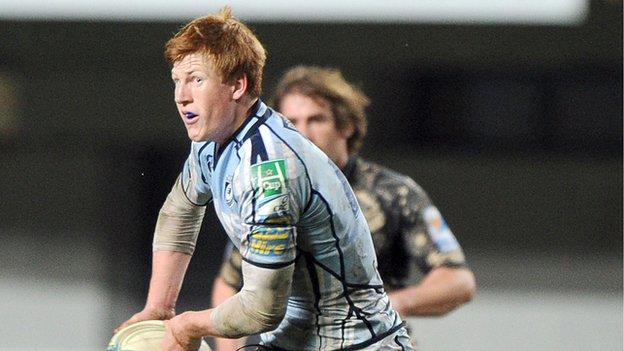 Fly-half Rhys Patchell is not ready to play for Wales, according to Cardiff Blues director of rugby Phil Davies.

But Davies believes the 19-year-old stand off should be considered for the Wales Under-20 side before joining the senior squad.

"We [must] nurture him until he's ready to play for Wales, and at the moment he's not ready," said Davies.

Patchell has impressed for the Blues since making his debut for the region against the Dragons on 15 September 2012.

Wales interim coach Rob Howley has said Patchell is being considered for the Six Nations squad, with three fly halves likely to be named.

Former Scarlets and Wales forward Davies agrees with former Wales team-mate, Scrum V pundit Jonathan Davies, that Patchell has a bright future at the top level, but is concerned the player is given time to develop.

"Rhys has got good mental qualities, he's very composed as a young fella. Physically he's developing, technically and tactically he's got a good grasp of it, but he's learning," he said.

I don't think I would pick him at number 10 for Wales against Ireland in the opening international of the Six Nations, but I would certainly introduce him to the squad. I think the important challenge Rob Howley and his coaches have now is how they manage Rhys. I'd say our [Wales'] two most sparkling talents over the past 10 years would probably be James Hook and Gavin Henson and for whatever reasons they haven't really fulfilled their potential, so the management of Rhys Patchell is crucial.

"We've got to make sure that we nurture him through things, and the experiences that he's getting with us at the moment I think are invaluable for him.

"If he goes and plays under-20s rugby, the Six Nations and the World Cup at that level is a fantastic experience for players.

"So I'm sure that would benefit him and at the moment the key thing is for him to keep developing physically, keep playing his rugby, keep enjoying his rugby and keep progressing him to make sure things don't get on top of him at an early age.

"That's the most important thing for me.

"I'll make sure he's looked after and he comes through and he'll be a massive asset for us and for Wales in the future.

"And once he gets in there [we must make sure] he has the tools to be able to stay there for a long period and be able to cope with it."