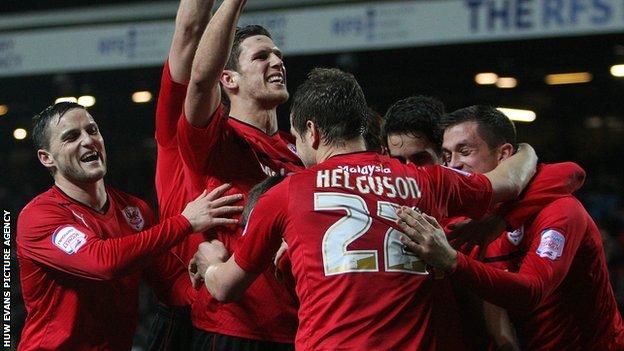 Malky MacKay praised the strength of his bench after Cardiff City opened a four point gap at the top of the Championship.

Second half substitutes Joe Mason and Kim Bo-Kyung both scored as the Bluebirds crushed Blackburn 4-1 at Ewood Park on Friday.

And manager MacKay says the quality of the replacements is giving Cardiff an extra edge in matches.

"It's the difference between this year and last year," said the Scotsman.

"We probably had youngsters coming off the bench last year.

"This year we've got people coming off the bench that absolutely can make an impact in the game.

"They're both [Mason and Bo-Kyung] players that I know can come on and they make an impact."

Mason was an 80th-minute replacement for Craig Bellamy at Ewood Park after the former Wales captain had scored Cardiff's second.

South Korean Kim came on for midfielder Craig Noone, and MacKay was full of praise for all four players.

"You know Craig [Bellamy] did a great job in terms of running beyond and the problems he was causing," said MacKay.

"He scored a fantastic second and ran himself into the ground. It was time to get young Joe on, get fresh legs on up there and I felt the same in midfield in terms of taking Craig Noone off."

Both subs made a major impact, first Mason latching on to a Helguson flick to fire in City's third in the 84th minute, then Kim sweeping a left foot shot past Paul Robinson after a swift counter-attack less than two minutes later.

It helped City maintain the recent momentum which has seen them pick up 16 points from their last six matches.

It also lifted them four points clear of second-placed Crystal Palace and eight ahead of Leicester who are in third place.

The Bluebirds play both teams in the next month, with MacKay emphasising the importance of momentum.

"You can only do what you can do and get on a winning run and get momentum, and that's certainly where they are at the moment," said MacKay.

"We've got to try and keep that up as much as possible.

"There's going to be tough games coming - every game is - it was going to be a tough one tonight but at the same time the boys applied themselves... and got the result they deserved."