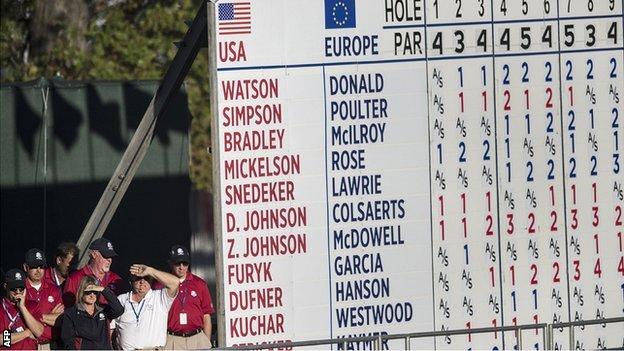 Europe's amazing Ryder Cup comeback against the USA last weekend would have been a source of inspiration for any golfer.

The scenes of jubilation were on a par with the celebrations witnessed at the Celtic Manor in 2010 when Colin Montgomery led Europe to a famous win on Welsh soil.

But what has been the legacy for Welsh golf after it hosted one of the largest global sporting events?

On this week's Sport Wales we investigate the positive attempts being made to help grow the game at grass-root level and ask if that work will lead to Welsh participation in a future European team.

The last person to hold that honour was Phil Price, who famously beat the then World number two Phil Mickelson in his singles match in 2002.

Price is not quite sure about the impact the Ryder Cup has made in Wales: "Answering honestly... it's made no difference, but hopefully it will do in 10 years time."

Time is running out for Chris Coleman, the Wales football manager

Time is running out for Chris Coleman, the Wales football manager, if he hopes to qualify for the World Cup in Brazil in 2014 after a disappointing start to the latest qualifying group.

Two defeats from their opening two matches sees his Wales side pointless and bottom of World Cup qualifying Group A.

With the pressure growing on Coleman ahead of the next match against Scotland, Dot Davies asks him how secure he feels in the hot seat and if Wales have any hope of turning things around.

How Coleman must wish Neil Taylor was available to him. Sport Wales has been to follow the Swansea defender as he recovers from surgery on his left ankle after his horrific injury in the game against Sunderland in September.

His recuperation has seen him venture into an oxygen chamber and Lisa Rogers will be finding out more.

Also, with the Wales rugby team kicking off another autumn series next month, we catch up with legendary Australian speedster David Campese for his views on the game in both hemispheres.

The World Cup-winner tells Sport Wales that despite winning the summer series against Wales 3-0, Australia are "there for the taking" and if Wales can't beat them now they never will.

Thanks Campo, no pressure on us then!