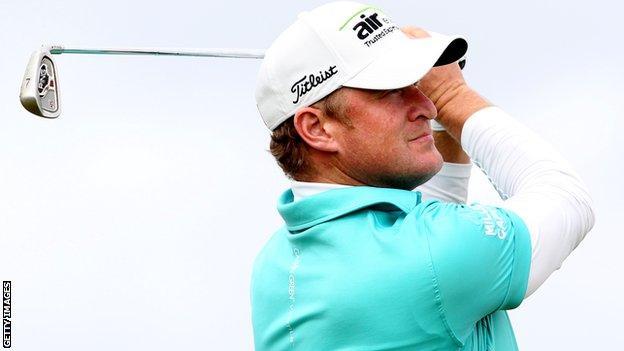 Jamie Donaldson says the Irish Open at Royal Portrush is proving the perfect preparation for next month's Open at Royal Lytham & St Annes.

And he began Sunday's final round at Portrush 12-under with a one-shot lead following a third-round 69.

The Welshman says competing at the Irish Open and the Scottish Open will stand him in good stead for Lytham.

"The next two weeks - this week and next week - are perfect preparations," he said.

His preparations for the Open Championship will include the Scottish Open at Castle Stuart Golf Links in Inverness between 12-15 July.

"The one in Scotland is maybe a little bit wider open on the fairways, but all in all it's still a links golf course and it's going to be windy," Donaldson added.

"All three weeks are pretty good tests, these two especially. This week might as well be an Open venue."

And Donaldson says the atmosphere at Royal Portrush is similar to that of an Open rather than a European Tour event.

"We don't play many courses as special as this," Donaldson said. "We play a lot of great courses obviously throughout the year.

"This in particular is one of the best. It's more like a British Open venue than a standard tour event. It's that special a golf course.

"There's no easy shot on the whole golf course and you've got to stay on top of your game and keep hitting fairways."

Donaldson is the highest-placed Welshman in the current world rankings at 116 and, as things stand, will be Wales's only representative at the Open Championship.

"It's nice, but you've got to take every week as it comes and do the best you can," said Donaldson of his position as Welsh number one.

"It's an outcome of playing well and it's nice, but we could do with more players playing better in Wales.

"They're all good players [but] form is temporary unfortunately. The better people play the stronger the World Cup chances are."