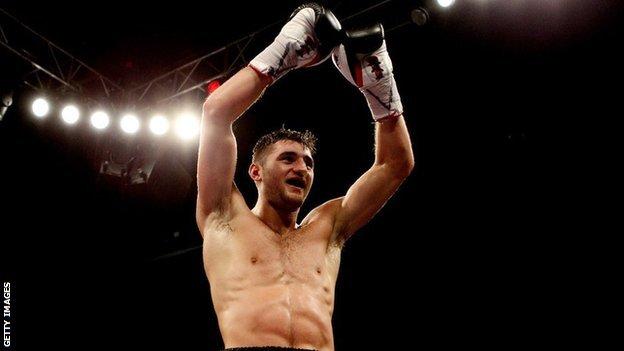 Nathan Cleverly has been forced to withdraw from his WBO light-heavyweight title defence against Robin Krasniqi due to illness.

The Welsh star was set to face the Kosovan on 28 April at the Royal Albert Hall, London, but has been unable to train for his fourth title defence.

"I've been unable to train because I've been laid up in bed with a viral infection," Cleverly said.

"There's not enough time to make up what I've missed in training."

It is not yet clear whether the fight with Krasniqi will be rearranged, or whether Cleverly will have to face the WBO's mandatory challenger, Russian Dmitry Sukhotsky.

"I've taken the advice of my doctor and been told to fully rest before attempting to start training again," Cleverly added.

"I'm really disappointed because I was looking forward to being the first fighter to bring boxing back to the Royal Albert Hall in over a decade and the first of the century."

Cleverly had been set to be the first Welshman to appear in a world title fight at the Albert Hall since Howard Winstone beat Mitsunori Seki to win the WBC featherweight crown in January 1968.

Another added incentive was that the 28 April date was on the same night as Bernard Hopkins's WBC world light-heavyweight title rematch with Chad Dawson in Atlantic City.

"It was a big night for me as Hopkins was facing Dawson on the same night and I was looking to do a good job on Krasniqi to get a fight with the winner," Cleverly added.

"I'm sorry for my fans, but I'm happy that the show will go on and a great talent like Billy Joe Saunders will now be topping the card along with Sam Webb and Matthew Hall, which looks like a cracking fight."

Hatfield's Olympic star Saunders, who was chief support on the card, will now replace Cleverly as one of the headline fighters when he takes on Hill for the vacant English middleweight title.

Joint top of the bill on the show will see Chislehurst's Webb in a final eliminator for the British light-middleweight championship against Manchester's hard-hitting Hall.