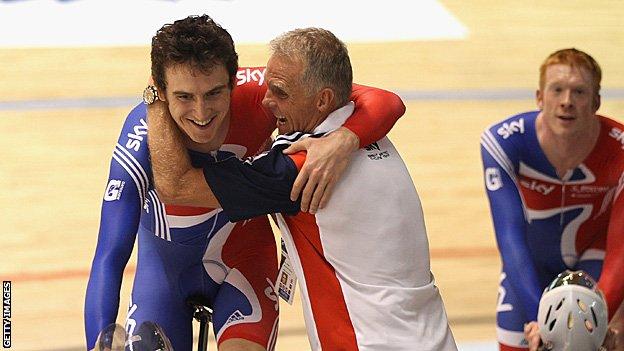 Geraint Thomas is wrong to miss the Tour de France in favour of competing at the London Olympics, according to Great Britain head coach Shane Sutton.

Thomas, 25, has chosen to defend his men's pursuit title instead of racing in cycling's premier road race.

Sutton believes the Welshman has made the decision for the "wrong reasons" and should be more selfish.

"He's doing it for the people of Wales, which is great, don't get me wrong, but deep down, he's torn," said Sutton.

Thomas helped GB win gold at the 2012 World Track Cycling Championships in Melbourne and is expected to be part of the men's pursuit team in London.

With this summer's Tour de France ending less than a fortnight before the Olympic track cycling begins on 2 August, Thomas was forced to choose between both competitions.

He opted for the Olympics back in October in 2011, giving himself the opportunity to become only the fourth Welshman to be a multiple Olympic gold medallist.

Speaking to BBC Wales for a forthcoming Olympic documentary, Sutton said: "I've always asked this question - and I've asked the same question as Sir Chris Hoy - G [Geraint] why would you want to go back and compete at the Olympics?

"But I actually think G is so iconic in this part of the world [Wales] that he feels the support he's had over the years and the support he continues to get from everybody - it's so massive I think he feels he has to return the favour.

"I think that's probably not the right reason and the pressure that must be on him not to ride the Tour, he must be killing himself."

Thomas wore the white jersey for best young rider in the opening seven stages at the 2011 Tour de France and finished 31st overall. A few months earlier he had his first major professional win with victory in the Tour of Bavaria.

Sutton already rates the Cardiff-born rider as "one of Wales' greatest sportsmen of all time" and believes a Tour de France victory is well within his capabilities.

"He can lead out, he can climb - he can do everything. He's one of the great bike riders out there at this moment in time."