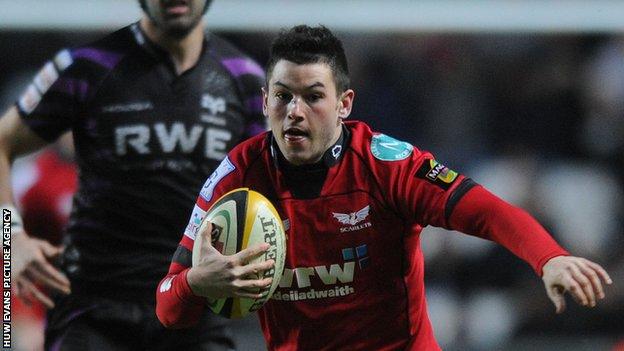 Scarlets coach Nigel Davies has revealed the region's Amlin Challenge Cup quarter-final preparations against Brive have been hit by tragedy.

Roy Newton, father of Scarlets back Dan Newton, suffered a fatal cardiac arrest on Tuesday and the player was informed during a Scarlets training session.

Newton offered to travel with the team to France but will remain at home.

"It was a tragic event on Tuesday and we felt terribly for Dan," said Davies.

"A tragedy has hit one of our squad members and Dan Newton was told during a squad session. His father is well-respected within the rugby community."

It's a huge loss for the community

Newton senior, who was 52, was a junior rugby coach at Whitland RFC.

As a mark of respect the match between Whitland and Carmarthen Athletic to be played on Saturday has been postponed.

The Scarlets have pledged to perform against Brive on Sunday in memory of Roy, who coached the likes of Wales duo Jonathan Davies and Mike Phillips at Whitland.

"We'll get our head round this slowly and I'm sure the boys will perform [in Brive] to their full potential if only mark of respect [to Dan]," added Davies.

"As a mark of respect and also the fact none of the players or the coaches could continue, we called the whole [training] session off on Tuesday. It puts rugby into perspective.

"It's been a very strange week. It is about putting everything back into perspective.

"It's about getting the emotions right for this game. Dan is a very popular member of the squad and a likeable character.

"He was certainly in our thinking and in fairness to Dan he has contacted us to say if he was selected he would certainly consider travelling with us because that would have been what his father would have wanted."

Wales centre Jonathan Davies admitted it was a difficult time for the players.

"It's a huge loss for the community. Roy was a massive part of the whole community [in Whitland]," he said.

"He coached me and my brother. We are getting round Dan as much as we can and supporting him.

"Although it's a difficult situation we have got to make sure we switch on. It's a massive game."