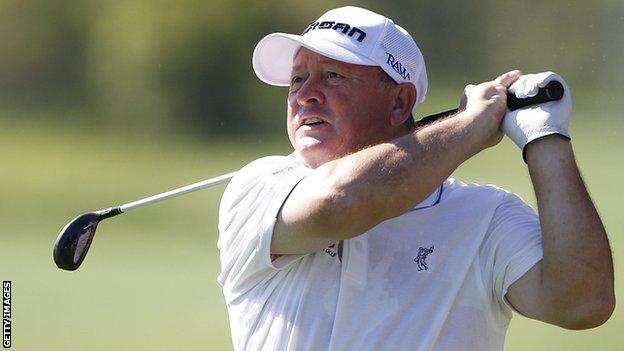 Ian Woosnam will play alongside Ryder Cup winner Edoardo Molinari for the first two rounds of the Masters.

They will be joined by American Kevin Chappell, who secured his first appearance at Augusta by finishing tied third at the 2011 US Open.

Woosnam, 54, will be making his 24th appearance at golf's first major championship of the year.

The 1991 champion suggested last year's appearance could have been his last as he suffered on the undulating course.

He was "knackered" after finishing his second round as the physical toll aggravated an old hip injury. He rested on a portable plastic tool at every opportunity.

But Woosnam feels fit enough to give it another go, despite having played only one tournament in 2012. That came at the Mississippi Gulf Resort Classic on the Champions Tour in March, where he finished tied 68th in a field of 81.

The Welshman, who had a practice round with Lee Westwood on Monday, will tee off at 1630 BST in the first round on Thursday and 1323 BST on Friday.

US Open champion Rory McIlroy has been drawn with 2009 Masters champion Angel Cabrera and America's Bubba Watson as he looks to bury the ghost of last year's meltdown.

McIlroy, 22, was partnered with Cabrera when he had his final day collapse at the tournament last year, shooting 80 after leading after three rounds.

Tiger Woods, who is aiming for his fifth Green Jacket, will play alongside Miguel Angel Jimenez and Bae Sang-moon.

Craig Stadler, the 1982 champion, will get the competition under way at 1250 BST - 10 minutes after former champions Arnold Palmer, Jack Nicklaus and Gary Player have hit ceremonial drives from the opening tee as official starters.

America's three-time champion Phil Mickelson, compatriot Hunter Mahan, who won the Houston Open on Sunday, and Swede Peter Hanson, will be the final group out on Thursday at 1853 BST.

Westwood, who finished as runner-up at Augusta in 2009, tees off with 2000 champion Vijay Singh of Fiji and Jim Furyk of the United States.