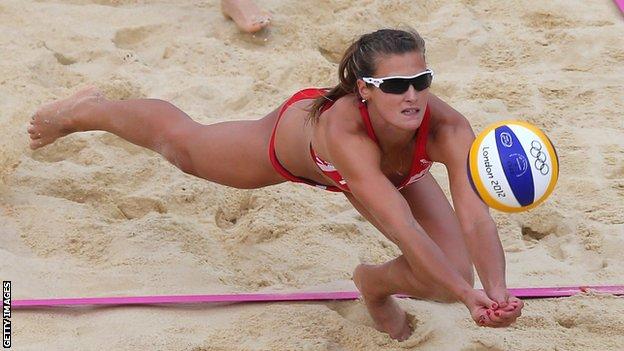 Dampney and Boulton have been drawn in a pool including world number ones Talita Antunes and Taiana Lima as they look to progress in the 48-team event.

"We didn't know whether we would be playing in the World Championships.

Dampney and Boulton's pool for the World Championships

"I think it would be great if we can get out of our pool and get into a top 10 finish, but the first aim is to come out of our group."

She teamed up with Shauna Mullin at last year's London Olympics and had hoped to return to the capital this year when Volleyball England tried to bring a women's world tour event to the city.

The plans were ultimately shelved when they failed to gained enough commercial backing, but Dampney believes there is still a chance that a London event can be held next year.

"It's really disappointing that fell through," she added.

"We were really looking forward to playing in front of a home crowd and build on what Horse Guards did for beach volleyball last year.

"There's talk of it again next year, so we've got our fingers crossed for that."