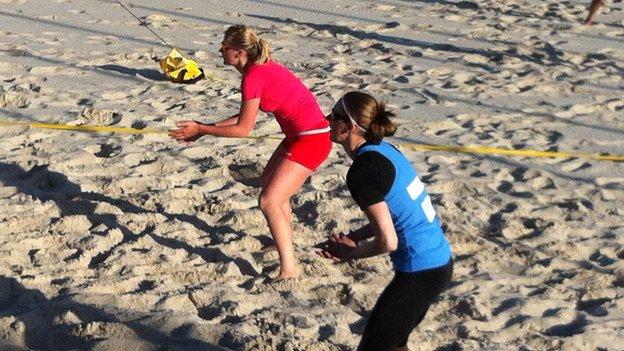 Jersey's beach volleyball players are hoping for success at next month's Island Games in Bermuda.

Anna Ryszawy and Dominika Thomas will represent Jersey in the women's tournament, while Berislav Bobus and Paul Gartshore will play in the men's.

Bobus won beach volleyball gold for the Cayman Islands in 2007 and says he and Gartshore can push for a podium place.

"We still have expectations of maybe sneaking into a bronze medal position," he told BBC Radio Jersey.

But Bobus, who works in Jersey's finance industry, says he and Gartshore have had to actively seek out some quality opposition.

A semi-final, maybe a bronze medal, that'll be a great achievement for us

"We don't have many sparring partners to play against in Jersey.

"There's a lot of girls playing, but not a lot of guys, so what Paul and I have been doing is going to the UK to play some serious games there.

"We've been once and we're going there again in a couple of weeks so that should give us some good training.

"I'm sure some of the Caribbean islands like Cayman and Bermuda will put in strong teams as they can play all year long so they get much more practice.

"But a semi-final, maybe a bronze medal, that'll be a great achievement for us."

Thomas was part of the Jersey volleyball team that played the traditional indoor version of the game in the Isle of Wight two years ago.

She moved over to Jersey in 2005 from Poland to work as an au pair and has been in Jersey ever since, but the poor British summer weather has hampered her and Ryszawy's preparations.

"The weather hasn't helped because we've had loads of rainy days and the wind has been blowing all the time.

"Training has been tough, but we're keen to get as much practice as possible, so when the sun is out we're trying to get out and do as much as we can.

"We don't know what to expect, but the teams will be tough and we're determined and optimistic and we hope we can do well.

"To be able to represent Jersey in Bermuda, playing beach volleyball which is something that I love, is definitely an honour.

"We will definitely take so much from this experience and cherish it for the years to come."