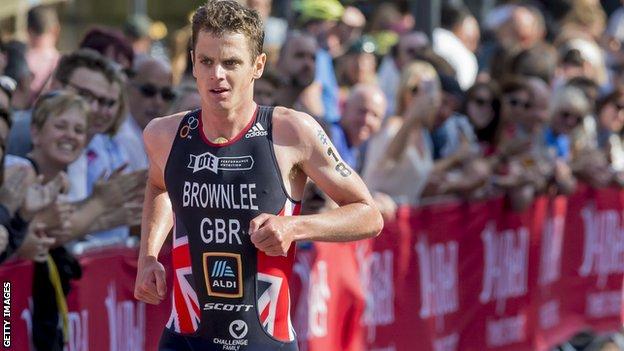 Jonny Brownlee says he will prepare for the heat of next year's Tokyo Olympic triathlon in his home in Leeds.

"I've tried to create my own heat chamber," he said. "It is basically my conservatory - I've put heaters in."

In 2016, Brownlee had to be helped over the line by brother Alistair in hot and humid conditions at the World Series race in Cozumel, Mexico.

The pair will take part in their home race in Leeds this weekend, with Alistair returning to the World Series.

Speaking about his hot-race preparations, Jonny told BBC Sport: "It's actually easy to do in your conservatory. I can train on my stationary bike or treadmill at probably 32, 35 degrees sometimes. And it's very humid - once you start sweating you create your own humidity.

"At the end of the day, hot is hot. It's all about getting your core temperature hot for about an hour. It doesn't matter how you do that."

After the drama of his near-collapse in Cozumel, he is keen to get the preparation right for Tokyo.

"Ahead of Rio [2016 Olympics] we went to St Moritz [in Switzerland] and it wasn't the hottest conditions," he said. "We did our normal sessions, put loads of clothes on, warmed down and went straight to the sauna for 45 minutes. That was awful."

On his Cozumel experience, he added: "There wasn't any lasting damage, which is really important. One of the reasons it happened is that I can get my core temperature so high without any problems but once my body reaches a certain temperature it basically shuts down."

The average maximum temperature for Tokyo in August is 31C, a full 10 degrees hotter than Leeds at that time of year.

"Anyone can get acclimatised with a couple of two-week periods but coming from Yorkshire is very hard," said Brownlee.

"There's different ways to get used to training in the heat - I was in Thailand and I'll do a similar thing in 2020 - or you replicate the heat at home.

"You can do that in heat chambers, where you have to travel to universities, or you can do it at home."

Find out how to get into triathlon in our special guide.