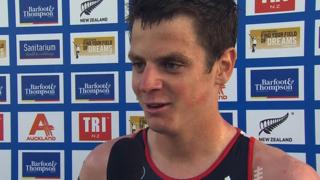 Brownlee, who lost the 2013 title to Gomez in a sprint finish in London, was easily beaten but still finished a strong second ahead of Australia's Aaron Royle.

Brownlee admits he "lacked a bit of sharpness", but is aiming to be fully fit for the Commonwealth Games in Glasgow this summer.