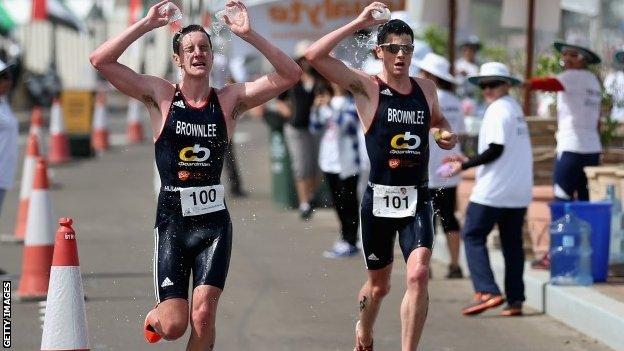 Olympic champion Alistair, who won the race last year, said: "We led out of the swim, stayed focused on the bike and gained a strong lead for the run."

Britain's Georgie Rutherford was fifth in the women's race.

Jonny, the 2012 world champion, was competing in the event, which sees the competitors race on the Formula 1 Yas Marina Circuit, for the first time.

"I've done the same events for four or five years now and so it's really cool to go somewhere so completely different," said the London 2012 Olympic bronze medallist.

"Where else can you ride on a F1 circuit and bike in the pits and chicanes? The Yas Marina Circuit was a highlight and, due to the smooth tarmac, allowed me to get up to 65km/h on my bike which I really enjoyed."

The Abu Dhabi triathlon is the unofficial season opener ahead of the World Series, which is made up of eight races around the globe and starts on 5 April in Auckland, New Zealand.