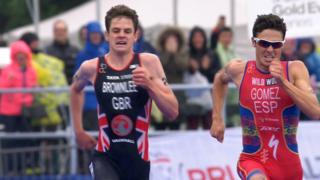 The Spaniard overtook the Briton in the final metres to secure the title, with Olympic champion Alistair Brownlee finishing down the field after suffering with an ankle injury on the run.

Jonathan admits he is "gutted" to lose by just one second, while Gomez describes his victory as "amazing", saying he "cannot believe" he is the world champion.