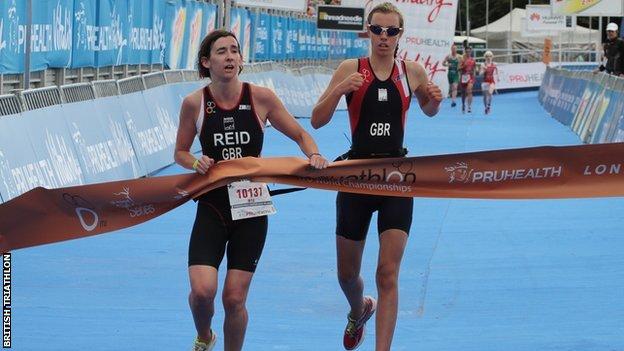 Cornwall's Melissa Reid warmed up for Friday's World Paratriathlon Championships with victory in the World Aquathlon event at Hyde Park.

The 22-year-old led after the swim and put in a strong showing on the run to finish in a time of 40 minutes and 15 seconds on Wednesday.

"There's not as many competitors in the aquathlon so I used it as a training run," Reid told BBC South West Sport.

"It helps to race the course and being able to pull away in the run was nice."

All my races have been training for the worlds

Unlike the triathlon, the aquathlon consists of just a run and a swim and not a bike ride.

Reid, the British and European champion, competes in the Tri-6 category for visually impaired athletes and has based her season around peaking for the World Championships.

She beat current world champion Susanna Rodriguez into second place, with the Spaniard finishing in a time of 40:33.

"Knowing I can get off and run faster than my main rival was perfect," added Reid.

"It's always been part of the preparation plan - as long as the prep went well, we were aiming for the time needed to win anyway.

"All my races have been training for the worlds as that's the biggest race of the year for us and it's been really good to be able to win them all and put us in a good position for Friday."

Reid is one of several Cornish triathletes competing in London, with her 16-year-old sister Courtney-Lee, Lowenna Hawkey and Kieran Townsend competing in the 16-19 age-group race and Rebecca Walters in the 20-24 age category.

Reid is a member of the Gyllyngvase Life Saving and Triathlon Club in Falmouth.