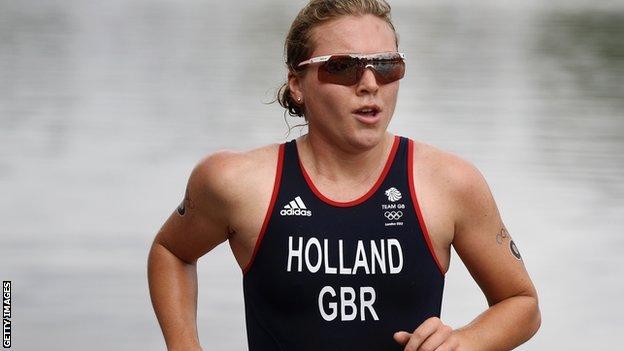 Vicky Holland finished strongly to claim a silver at the ETU Triathlon European Championships in Turkey.

The 27-year-old Briton, who could not train in April because of illness, finished behind winner Rachel Klamer and third-placed Vendula Frintova.

"I'm over the moon. I don't think I could have asked for more, especially not a medal," said Holland.

"It's a championship medal and it's a medal for Great Britain, so it's right up there."

I couldn't give anything more, I am really pleased

Holland had a good swim before joining the leading pack of 18 athletes during the bike ride.

She fell behind again on the transition into the run but recovered to earn an impressive second place.

"I had a great swim and felt in control," added Holland. "I didn't have the best of transitions. Unfortunately, I gave away a bit of time.

"On the final lap, I didn't know how I was going to feel. I couldn't give anything more, I am really pleased.

"On the final hill, Rachel [Klamer] dug in and then it was on from there. We dropped the others and then Rachel broke away."