The 30-year-old Briton has never been beyond the third round in 11 previous attempts at SW19 and she meets world number 62 Juvan in the opening match on Court One.

Wimbledon's second week has remained elusive for Watson during her career but she has hardly enjoyed the luck of the draw on the three past occasions she has reached the last 32.

In 2012, she faced eventual runner-up Agnieszka Radwanska, three years later she memorably took Serena Williams to a deciding set and then fell to former world number one Victoria Azarenka in 2017.

Surprise defeats for second seed Anett Kontaveit and Belinda Bencic have opened up Watson's section of the draw, which is guaranteed to yield an unseeded quarter-finalist.

And while the 30-year-old will not take third-round opponent Juvan for granted, she knows how big an opportunity she has.

"You see upsets, especially in the women's game, just constantly now because the strength and depth is so big," Watson said.

"But yeah I do see it as an opportunity and also I think when people look at the draw and see me at Wimbledon on grass, it's not an easy draw either.

"I've been here before. I'm more level-headed now. Before when I was first on tour, making my first third round, I was on top of the world. But I think it's better being how I am now."

Watson has not had it easy so far after her two opening matches both rolled into the following day, meaning she has played on every day of this year's Championships.

"It's been a really tough few days for me with the scheduling - it's not been on my side at all," she added.

"I've just tried to do the best I could, in every situation try to stay positive and in the moment. I feel like I've handled it really well."

While defending champion Djokovic, even at the age of 35, remains at the sport's summit, his likeliest successor as top player in his homeland appears to be the man he will face on Friday.

Kecmanovic is already ranked 30th in the world, aged 22, and has reached the quarter-finals at Indian Wells and Miami this year, as well as the fourth round of the Australian Open.

But this year is the first time he has progressed past round two at Wimbledon and he faces a steep task against his illustrious countryman, who looked imperious against Thanasi Kokkinakis on Wednesday.

Djokovic dropped a set in his opening-round win over Kwon Soon-woo but lost just seven games as he swept aside the Australian.

"I must say I'm quite pleased with the way I've raised the level of tennis in two days," the world number three said.

"Hopefully I can keep that trajectory, just thinking about the next challenge and hope things will get better as the tournament goes on."

Ninth seed Norrie, meanwhile, like Watson, is looking to reach the fourth round of a Grand Slam for the first time, having lost to eight-time champion Roger Federer in four sets in round three last year.

He survived a scare to beat his former doubles partner Spaniard Jaume Munar in five sets on Wednesday and now meets American Johnson, who saw off British wildcard Ryan Peniston.

"It's another opportunity to embrace the pressure, embrace the challenge of trying to make the second week," Norrie said.

"I want to do it for me and my team, to prove that I can do it at Slams, not just at other tournaments. It's Wimbledon. I just want to do well here and play my best tennis.

"This is the biggest tournament of the year for me, being at home, in front of all the fans. I just want to do it to enjoy that moment." 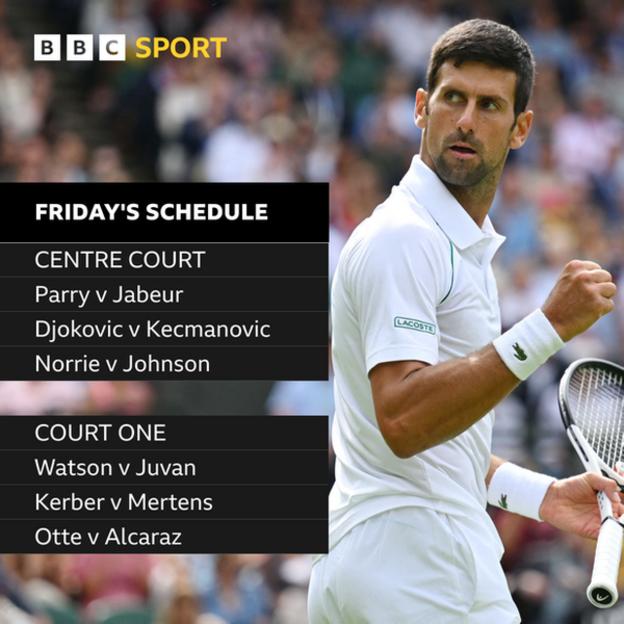