A stellar cast of ageing greats has assembled for what could be one of the final times at Wimbledon as the jewel of the British sporting summer returns.

Many of the world's biggest names are set to take part at the All England Club, led by Serena Williams, Rafael Nadal, Novak Djokovic and Andy Murray.

However, it will be another SW19 tournament which has a different feel because of a major global crisis.

There are no ranking points available for the players because Wimbledon, unlike its Grand Slam partners at the French Open and US Open, decided to ban Russian and Belarusian players from competing because of the invasion of Ukraine.

Daniil Medvedev, the Russian who is the men's world number one, is the biggest absentee because of the move.

With the 135th edition of the championships starting on Monday, BBC Sport runs through the major talking points in SW19.

Can Nadal battle the pain to continue his clean sweep?

Despite thinking last year his career was over because of a chronic foot injury, 36-year-old Nadal has battled back to win the Australian Open and French Open titles this year.

Shortly after winning a record-extending 22nd Grand Slam men's singles title in Paris, attention quickly turned to Wimbledon and whether Nadal would be able to play.

The Spaniard needed anaesthetic injections to numb the pain at Roland Garros, saying he "could not and did not want to" continue playing under those circumstances.

But after having radiofrequency ablation treatment - which uses heat on the nerve to quell long-term pain - he decided to travel to London.

"It's obvious that, if I am here, it's because things are going better," said second seed Nadal.

"If not, I would not be here. I'm quite happy about the things, how they evolved. I can't be super happy because I don't know what can happen."

After playing an exhibition at the Hurlingham Club, Nadal headed to the All England Club and took part in the first practice session allowed on Centre Court.

Top seed Djokovic, 35, remains the favourite to retain the men's singles and win a seventh title which would move him alongside Pete Sampras and one behind Roger Federer's record.

"I didn't have any lead-up tournaments to Wimbledon, but I've had success in the past without having any official matches and tournaments," said Djokovic.

"Over the years, I had success with adapting quickly to the surface, so there is no reason not to believe that I can do it again."

Federer is not playing as he recovers from a knee injury which needed a third surgery in August.

The 40-year-old Swiss has not played since losing in the Wimbledon quarter-finals last year but plans to make a comeback at the Laver Cup and Swiss Indoors tournament later this year.

Serbia's Djokovic is tied with Federer on 20 Grand Slam titles and is aiming to close the gap on Nadal in the continuing battle to finish with the most majors. 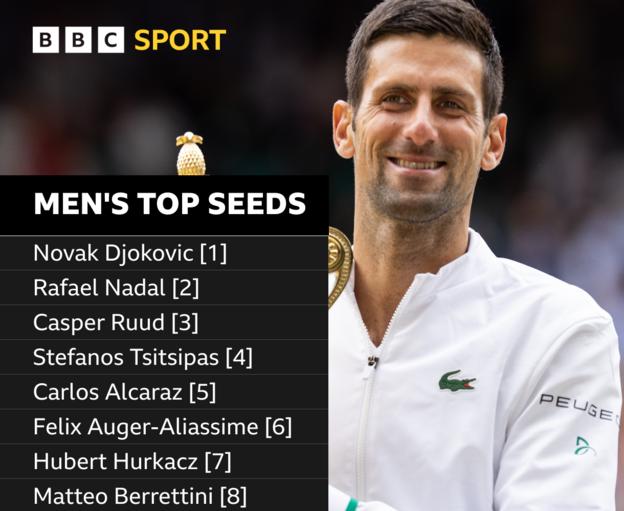 Is this a comeback or farewell for Williams?

The plan is for the 23-time Grand Slam singles champion to play in the singles at the All England Club.

Williams, 40, has been given a wildcard for the tournament where she has won seven of her major titles, but has not played singles since she retired injured during her first-round match at Wimbledon last year.

The American made her comeback to the WTA Tour at Eastbourne this week, playing in the doubles alongside Tunisia's Ons Jabeur.

After the pair won their opening match on Tuesday, she said she did not know if this was the start of a longer comeback or a farewell tour.

"You know what, I'm literally taking it one day at a time," she said.

Dubbed 'Onsrena', the team won again on Wednesday before pulling out of their semi-final match, citing a knee injury for Jabeur.

As the centrepiece of the British sporting summer, Wimbledon thrives even more with the presence of some strong home hopes.

The biggest stars are, of course, Murray and Raducanu. But both have seen their preparations disrupted for their home Grand Slam event by injury.

Two-time champion Murray, 35, has been left frustrated by an abdominal injury which he picked up in the Stuttgart final on 12 June.

England's Raducanu, 19, is short of grass-court preparation after pulling out of Eastbourne with a side problem.

But both players were upbeat in their pre-Wimbledon news conferences, with Murray saying training over the past few days had been "really positive" and Raducanu insisting she was "ready to go".

Who are the emerging stars to succeed the old guard?

Poland's Swiatek is the dominant player on the WTA Tour this year, having won her sixth tournament in a row at the recent French Open. A 35-match winning streak has taken her into a huge lead at the top of the world rankings.

The 21-year-old has filled the void left by Australia's Ashleigh Barty, who retired shortly after winning her home major, in some style.

Barty, 25, also won the Wimbledon ladies singles title last year, meaning it is still to be decided who opens play on Centre Court on Tuesday - an honour given to the reigning women's champion.

Despite her injury concern, Jabeur is among the favourites behind Swiatek.

"I love grass," she said. "My game suits it very well.

"You can really disturb a lot of players with the slices, the drop shot. You can never know if I'm hitting or changing the rhythm so I think that's a big advantage for me."

American teenager Coco Gauff famously reached the fourth round as a 15-year-old in 2019 and, three weeks after losing to Swiatek in her first major final, is tipped to go far again.

Estonia's Anett Kontaveit is seeded second, but has only won back-to-back matches once since reaching the Doha final in February.

The 26-year-old has never progressed past the third round at Wimbledon and lost in the first round last year.

Brazilian 23rd seed Beatriz Haddad Maia is a name to watch after an incredible grass-court season which has seen her win the titles in Nottingham and Birmingham, and reach the last four at Eastbourne.

In the men's draw, Italy's Matteo Berrettini is rated as the second favourite behind Djokovic as the 26-year-old aims for a first major title.

The eighth seed's hefty serve and powerful groundstrokes are well suited to the grass and, after coming back from hand surgery, has won nine matches in a row on the surface to win the Stuttgart and Queen's titles.

Spanish 19-year-old Carlos Alcaraz is seen as a future multiple Grand Slam champion and could be a threat, while Poland's Hubert Hurkacz, who won the Halle title last week, is aiming to match last year's run to the semi-finals.

Norway's Casper Ruud is seeded third after reaching the French Open final, but has only won two matches in his career on a surface which he once joked was for playing golf on and not tennis.

Fears Wimbledon would be an 'exhibition' prove unfounded

The ranking points on offer to the players were stripped by the ATP and WTA in response to Wimbledon's decision to ban Russian and Belarusian players from competing.

That led to four-time major champion Naomi Osaka saying it could leave the grass-court Grand Slam tournament feeling like an "exhibition" event.

The 24-year-old Japanese star is not playing after pulling out because of an Achilles injury.

But fears that many of the world's leading stars would withdraw as a result of the decision have proved unfounded.

The banning of Russian and Belarusian players has had the greatest effect on the look of the seedings.

Along with US Open champion Medvedev, fellow Russian Andrey Rublev is another top-10 player not present in the men's draw.

World number two Alexander Zverev is out with the ankle injury which he suffered in the French Open semi-finals.

On the women's side, Belarusian world number six Aryna Sabalenka is the most notable absentee.

The seedings for Wimbledon now directly follow the world rankings after previously taking into account past performances on the grass.

What about the other Brits?

British men's number one Cameron Norrie is the highest-ranked home player and will be seeded ninth as he looks to reach the second week of a Grand Slam for the first time.

The 26-year-old left-hander has never progressed past the third round of a major.

Dan Evans, 32, is the only other seeded Briton at 28th as Murray - who briefly returned to the top 50 recently for the first time since 2018 - fell short after he was unable to play Queen's.

The All England Club has given wildcards to 10 other British players, including Katie Boulter, Jodie Burrage and Ryan Peniston, a trio who have earned some notable results in the grass-court season so far.

World number one Joe Salisbury heads the home interest in the doubles, with 29 others taking part in the men's and women's events.