The lush green courts, the strawberries, the white clothes... the unmistakable familiarity of Wimbledon is just around the corner.

But there are also a few changes this year at the grass-court Grand Slam, which starts on 27 June.

Russians and Belarusians are banned

Since March, a cursory look down the ATP and WTA rankings has revealed some gaps.

Where the white, blue and red of the Russian flag should be next to world number one Daniil Medvedev's name, there is only a blank white rectangle.

And world number six Aryna Sabalenka is similarly missing the red and green of Belarus.

Since the start of the Russian invasion of Ukraine neither they nor any of their compatriots have been allowed to compete under their own flags.

But come the Wimbledon draw the absences will be more significant. It will not just be the flags that are missing. Instead, all Russian and Belarusian players have been banned from taking part.

The All England Club's action went far beyond the action taken by either the men's or women's tours.

A key consideration was reportedly concern that any Russian or Belarusian winner would be congratulated and presented with a trophy by a member of the Royal Family.

"We recognise that this is hard on the individuals affected, and it is with sadness that they will suffer for the actions of the leaders of the Russian regime," All England Club chairman Ian Hewitt said.

A Kremlin spokesperson said the decision "turns athletes into hostages to political prejudice".

"Russia is a very strong tennis country, our athletes are at the top of world rankings - the competition itself will suffer from their removal," he added.

No points for prizes

In the absence of Russian and Belarusian players, there is a further absence.

The ATP and WTA, which run the men's and women's tours respectively, reacted to the ban by stripping this year's Wimbledon of its ranking points.

The International Tennis Federation (ITF) will not grant ranking points in the junior and wheelchair events either.

Speaking at the French Open in May, former world number one Naomi Osaka said that without the chance to move up the rankings, something fundamental would be missing.

"It's more like an exhibition," she said, suggesting she might skip the event before she was ruled out by an Achilles injury. "I know this isn't true, right? But my brain just like feels that way."

The biggest potential loser from the lack of ranking points is a surprise champion. Should a rank outsider wildly outperform expectations, as Britain's Emma Raducanu did in winning the 2021 US Open, they would be denied the bumper crop of ranking points that comes with it.

That in turn might affect whether they were automatically entered in some of the other big events on the tennis calendar.

The Championships' official towel is one of the biggest sellers in Wimbledon's shop, with each edition of the tournament commemorated with a different design.

This year's features a large, eye-catching, almost circular design in the centre.

Look a little closer and it is revealed to be the original architectural design for Centre Court, the stage that has been the centrepiece of the Championships in its current location for 100 years this summer.

The centenary will be marked by a special ceremony on Sunday, 3 July. Expect the deeds of past British singles champions Fred Perry, Ann Jones, Virginia Wade and Andy Murray to feature heavily.

And talking of Sunday, 3 July….

For the first time, play is planned on all 14 days between Wimbledon's start and conclusion.

Previously, the 'middle Sunday' between the first and second week's play has been left off the schedule, with play only put on if the weather has caused a backlog of matches.

In the tournament's history, organisers have only had to deploy the rest day for matches on four occasions, most recently in 2016.

However, this year Middle Sunday is firmly on the schedule. Instead of the usual 'manic' second Monday, on which the entirety of the singles fourth round is played on one day, the last 16 of each draw will be split across the Sunday as well.

Wimbledon organisers say it will make the tournament more resilient and the action more accessible.

It will also presumably make the tournament more money with an extra day of tickets to sell and a more comprehensive spread of action to offer broadcasters.

And, helping to get people in to see it all...

The 'Queue' is back! 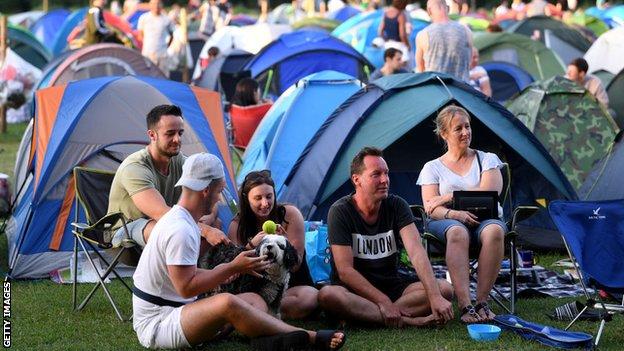 It is three years since we saw the famous 'Queue' for on-the-day tickets, with overnight campers forming an orderly line snaking up and down Wimbledon Park.

But after the 2020 event was cancelled because of the coronavirus pandemic and the 2021 edition used an online ticketing system, this year the tents are back.

While some things will have changed at Wimbledon this year, the joy of getting to the front of that queue will not have.

The top players will be allowed to practise on Centre Court and Court One - Wimbledon's main show courts - in another major break from tradition.

Previously they were not allowed to step on the famous grass courts until they walked out for their matches during the championships.

That was in contrast to the other three Grand Slam events - the Australian Open, French Open and US Open - which each allow players to practise on their show courts.

Last year, the surface on Centre Court was labelled "brutal" by Andy Murray after many players slipped in the early stages of the tournament - including Serena Williams, who then had to retire from her first-round match.

British men's number one Cameron Norrie said allowing players to practise "could be beneficial" and help bed in the surface before the competitive action.

"I think it's nice that they've done that," added fellow Briton Dan Evans. "It's a great addition, if they do."

And one other change for this year will be 5 Live's Wimbledon Daily podcast with Jonathan Overend. It will provide reaction to the big stories with some of the biggest names from the court, and take listeners behind the scenes at the world famous SW19. It will be available on BBC Sounds.