Not only was Novak Djokovic playing for the Australian Open title on Sunday, he was playing catch-up in the race to be crowned the 'GOAT' in men's tennis.

The number of Grand Slam titles is the most obvious and easiest metric for those who wish to determine - and not everyone does - which man is the Greatest Of All Time.

Beating Russia's Daniil Medvedev for a ninth Australian Open title may prove to be pivotal in the race. 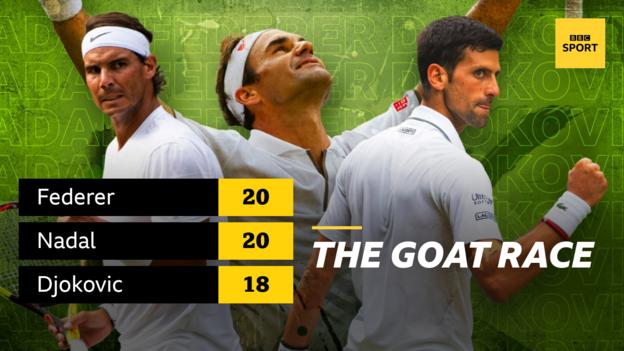 The 33-year-old is a year younger than Nadal and seems to have plenty of time on his side over 39-year-old Federer, who did not play in Melbourne because of a knee injury.

For some, the 'GOAT' discussion is frivolous and does a disservice to the achievements of each player in their own right.

Looking purely at the numbers does not tell the full picture. It is not possible to quantify their different playing styles, how they have adapted their games, their physical and mental strength, nor how they have overcome the tough moments that have peppered all of their careers.

But it does provide the framework for the debate. Here, BBC Sport crunches the statistics for you to consider and then have your say in the comments section at the bottom.

From a clear frontrunner to a three-horse race

The race to be crowned the 'GOAT' - in terms of major titles, at least - is tighter between the top three men than it ever has been before.

When Federer overtook Pete Sampras' previous best mark - winning his 15th Grand Slam title, aged 27, at Wimbledon in 2009 - few thought he would ever be caught.

At that stage, 23-year-old Nadal had won six majors and 22-year-old Djokovic had not added to his maiden title at the Australian Open in 2008. 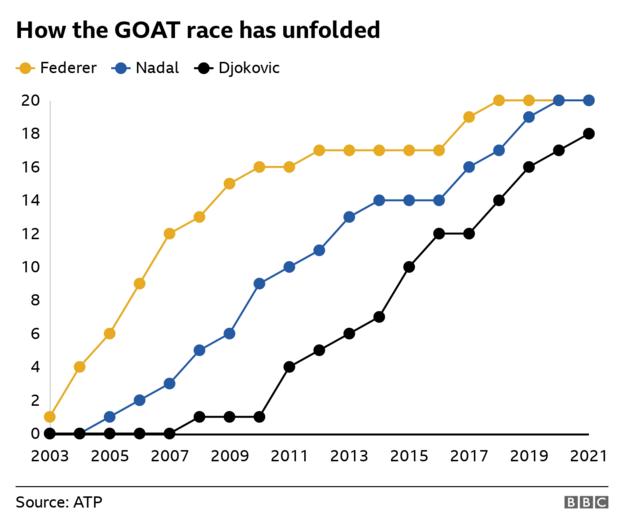 After winning at least one major in every year between 2003 and 2010, Federer's trajectory began to plateau during 2011, the year Djokovic took his game to new heights.

Another Wimbledon title followed in 2012 but then, thanks to a combination of his rivals' brilliance and his injuries, the Swiss did not win another major in the next four years.

Most had written him off as Nadal and Djokovic closed in on his tally, before Federer's renaissance in 2017 - on the back of his rivals stumbling in the race because of injury and loss of form - kept him at least three titles ahead.

That was until 2019 when Nadal and Djokovic shared the four majors equally between them, leaving the trio closer together than ever.

Now Federer has company - for the first time since he was briefly level with Sampras in 2009 - after Nadal's win at Roland Garros last year. 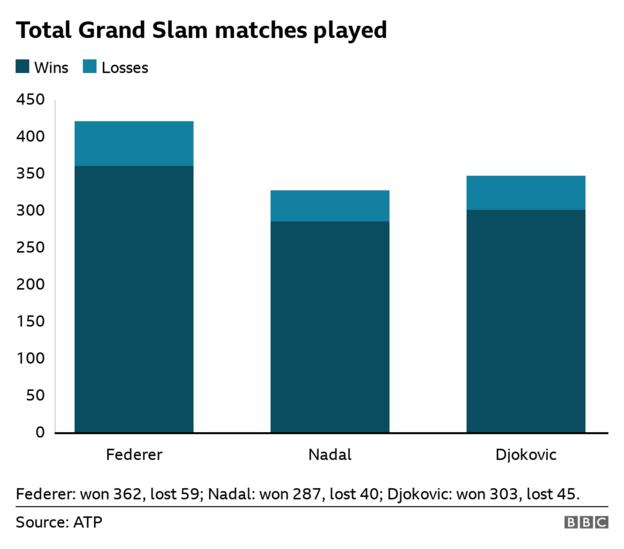 How do they compare across the different surfaces?

Some argue that Nadal's utter dominance on the Roland Garros clay means he is perhaps not as complete an all-round player as Federer and Djokovic.

The 'King of Clay' has won 13 of his 20 major titles in Paris. Neither Federer nor Djokovic have been as dominant as that at one place, although neither has any other player - male or female - in the history of the sport.

But Federer and Djokovic do each have a Grand Slam they have bossed over the years and at which they hold the record for the number of men's titles won.

Djokovic has claimed nine of his 18 victories on the Australian Open hard courts, while Federer has won eight of his 20 majors on the Wimbledon grass. 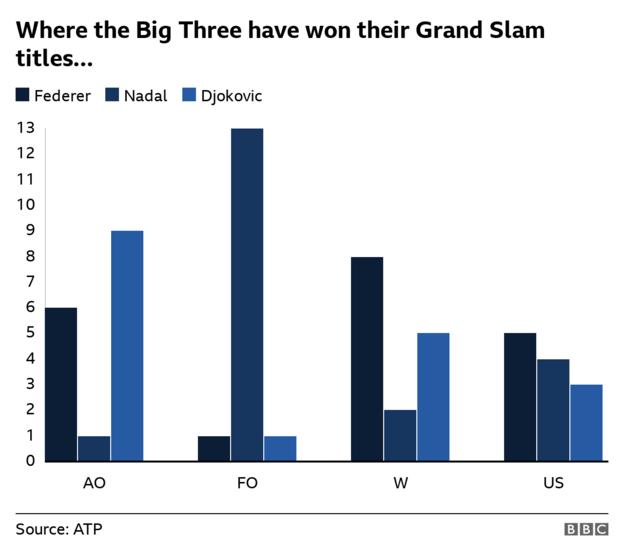 However, there is still one feat evading them. Neither Federer, Nadal nor Djokovic have managed to become the first man in the Open era to win each of the four Grand Slams twice.

Djokovic had the opportunity when he played Nadal in the French Open final last year, but was outplayed as the Spaniard won.

Djokovic and Federer have the next chance to claim this achievement before their rivals when they return to Roland Garros in May.

How have they fared against each other?

This is another area where Djokovic's claims are strengthened.

He has a better head-to-head record against both Federer and Nadal in their total meetings. 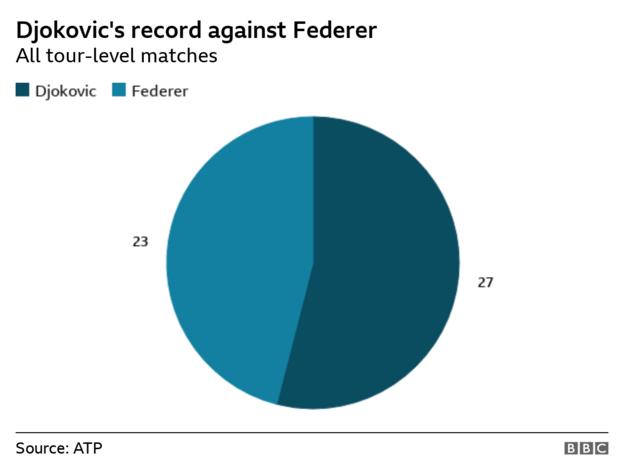 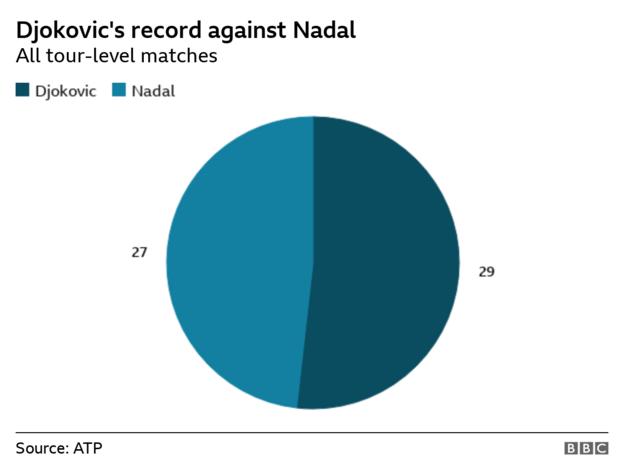 Djokovic's dominance over Federer has also borne out in their Grand Slam meetings.

However, Nadal's win in October's French Open final means the Spaniard has the upper hand over Djokovic at the majors. 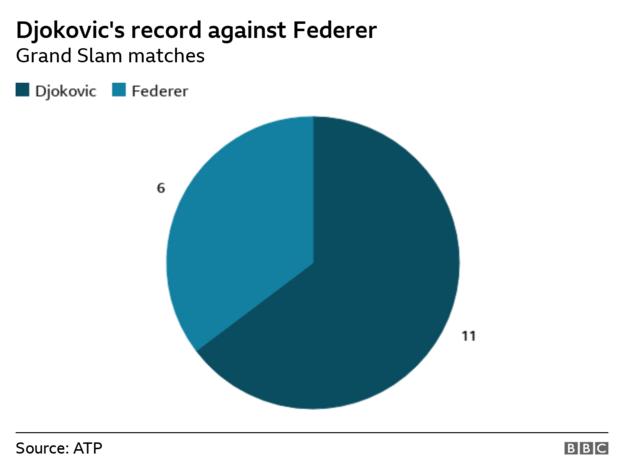 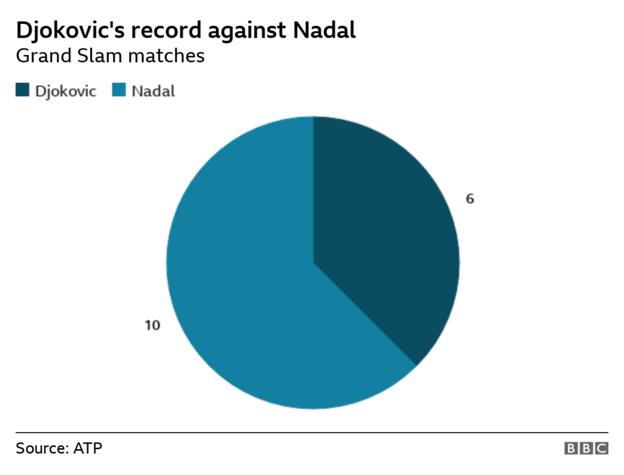 Nadal has also beaten his two biggest rivals the most times on the way to his Grand Slam wins:

Aside from Grand Slam titles, the length of time spent as the world number one is another key indicator.

Federer has spent the most weeks in history at the top of the men's rankings - but will be overtaken by Djokovic next month.

Nadal losing in the Australian Open quarter-finals ensured Djokovic will take that record away from the Swiss.

The Serb cannot be dislodged for the time being and, on 8 March, will be top of the rankings for a 311th week of his career.

"That was a big goal. Achieving that is a relief for me and now I'm mostly going to focus all my attention on Slams," said Djokovic. 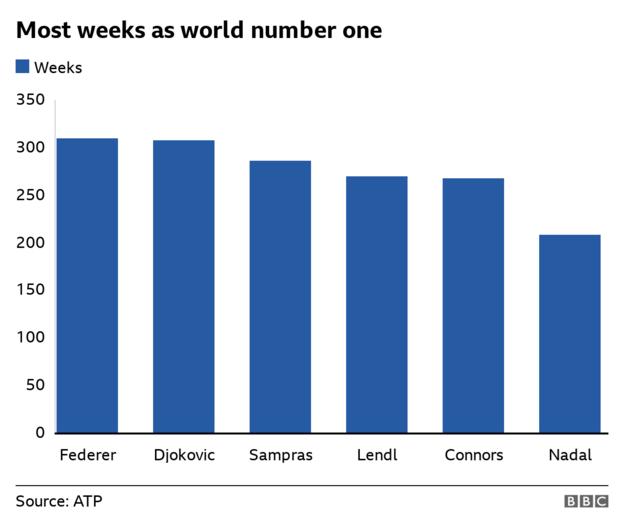 What about the other big tournaments?

While Grand Slams garner the most attention because of their prestige, there are plenty of other important tournaments that feed into this conversation.

Of the big three, Federer has won the most titles in his career. In fact, only American Jimmy Connors - who won 109 titles - has bettered this tally in the men's game. 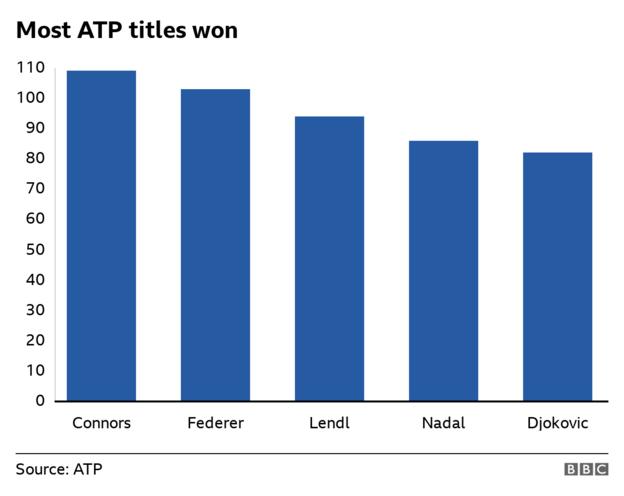 Federer also leads the way in terms of winning the end-of-season ATP Tour Finals, considered by most as the fifth Grand Slam.

The Swiss has won six of those events, which see a round-robin group followed by a knockout stage for the world's top eight leading players over the season.

Djokovic has won the event five times, while Nadal curiously has never won.

Nadal is a two-time runner-up - losing to Federer in 2010 and Djokovic in 2013 - but has missed four of the past nine tournaments through injury.

Underneath the Grand Slams and the Tour Finals, the next tier of events are the nine Masters tournaments.

Since 2009, these have been held on hard courts in Indian Wells, Miami, Canada (alternating between Montreal and Toronto), Cincinnati, Shanghai and Paris Bercy, with clay-courts events in Monte Carlo, Madrid and Rome.

Last year because of the coronavirus pandemic the only events held were in Cincinnati, Rome - both won by Djokovic - and the Paris indoors won by Medvedev.

Djokovic won on the Rome clay to claim his 36th Masters title and move clear of Nadal (35), with Federer (27), Andre Agassi (18) and Andy Murray (14) following behind.

In 2018, Djokovic became the first and only man to win all nine Masters tournaments. 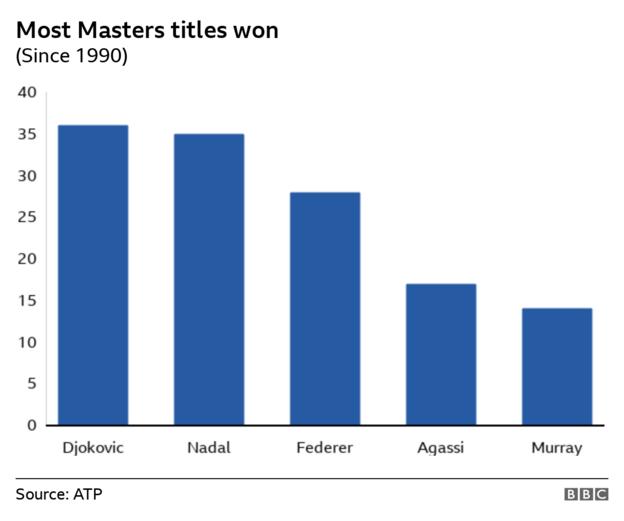 Now you have considered the evidence, who do you think is the men's GOAT? Have your say in the comments section below.