Amid talk about his seven Grand Slam victories and his desire to add a French Open title to the ones he's already secured at Wimbledon, the US Open and the Australian Open, Jamie Murray breaks off and speaks about life closer to home.

He drifts to moments spent with his father, Willie, not on the tennis court in Dunblane, but on the golf course that sits beside it.

You don't hear much about Jamie and golf, but that's a bond that will endure longer than his love of tennis. He says that when he's retired from professional sport he'll spend more time hitting balls down fairways than whacking them across a tennis net.

You don't hear much about Willie Murray either and that, you suspect, is exactly how he likes it.

His eldest son brings us back to the days and months spent walking the fairways with his old man. "Dad comes down to Wimbledon to watch us, but he's not interested in any of the cameras," Jamie explains. "He watches and leaves.

"When I was young, the golf course was our way of spending time together. I've vivid memories of the fifth hole at Dunblane and the two of us chipping around that green for hours until it got dark, my dad battling with his short game.

"Golf challenged tennis in my teenage years. I was up there until dark, Monday to Thursday, junior medal on a Friday, adult medal on Saturday. My grandparents live on the second tee. I loved it, but tennis took over eventually."

'We were always willing to go that bit further'

The Murrays of Dunblane remain one of the great Scottish sports stories, with surely only the Lisbon Lions to rival it in terms of jaw-dropping brilliance.

Speaking on the latest edition of This Sporting Life, the elder Murray brother lays it all out, from boy to man, from frustrated player to the best in his discipline in the world.

The fact that he speaks in such an understated way is almost as impressive as his victories themselves.

Airs and graces? You've got to be kidding. He sounds as rooted in normality now than he was when sitting with his brother in the back of his mother Judy's car as they headed for tournaments in England.

"We didn't necessarily have child minders so when mum had to coach, we went along picking up balls and being annoying," says Jamie. "At some point we picked up racquets and never looked back."

Judy was never pushy, but once her boys committed to tennis she transported them to another level. Collected from school on a Friday, they'd kick on for Bolton or Sunderland or Manchester or places further south.

Sometimes it would be just Jamie and Andy, and other times a few other aspiring locals would go with them. "It was easier when there were more of us, because tennis is a very lonely sport," says Jamie. "When it's just parent and child all the time, it's harder on the kid."

Those trips make him laugh now, as he explains: "We always felt like it was more difficult for us because we were the ones who had to travel long distances in order to compete. We always felt like we were swimming upstream and we were always willing to fight harder and go that extra bit further to win.

"You had some posers flying around wearing all the latest gear, but it was always fun to beat them because they were prancing around and here we were driving five hours to get there, arriving at midnight and up at eight the next day to play a match as 10-year-olds.

"It was harder for the players coming from Scotland. Our mum instilled in us that it's gonna be tougher for us. We didn't have everything on our doorstep. That probably stood us in good stead when we decided to become pro.

"It's not for everyone, it's not an easy life. People turn on their TV and see fully packed stadiums in Miami and Federer playing against Nadal, but that's not reality."

'Andy still thinks he can beat everyone'

You'll find Jamie and Andy in Paris. Jamie's best result on his least favourite surface is a quarter-final in the men's doubles in 2017, Andy's high at Roland Garros coming when he made the final of the singles in 2016, where he was beaten in four sets by Novak Djokovic. This year Andy is up against 2015 winner Stan Wawrinka in the first round.

"It's the hardest one for me to win because clay is not my best surface," Jamie says. "I think it would be my biggest achievement if I was to win that.

"Andy's been through the mill for the last three or four years so it's great that he's having a bit of a run at it now.

"His tennis ability is still there, his ball striking and all that, it's just whether his body will hold up to the demands of competitive sport. I don't think his desire has lessened. In fact, I know it hasn't because if it had there's no way he would have been able to do all the rehab over the last few years.

"I think he feels like the game hasn't moved on that much in his time away and still believes that if he's fit and healthy he can beat everyone. To go through all the rehab he's gone through you have to have that burning desire." 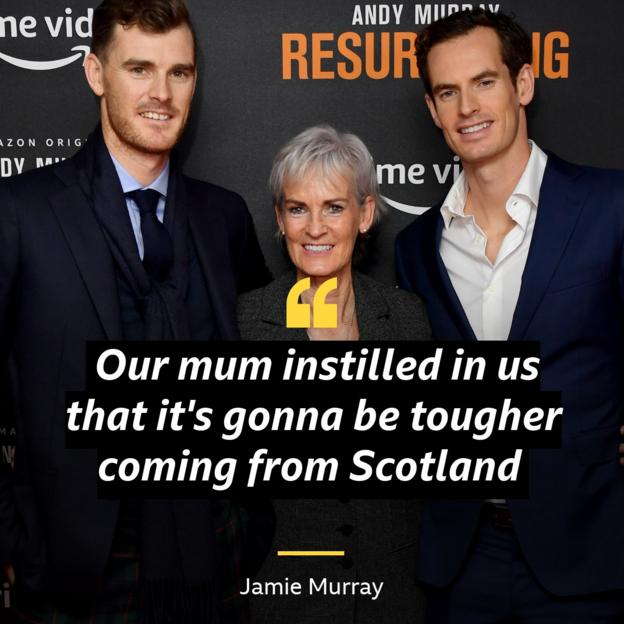 That drive runs in the family, of course. Their mum is still working on a dream of building a tennis centre between Dunblane and Bridge of Allan, a project that seems to be in a holding pattern.

"I'm definitely concerned that this golden opportunity is not being taken advantage of," her eldest son says. "It feels like if it's not done while me and Andy are still competing then it's never going to get done.

"It's difficult to be optimistic because we've not seen much, if any, change throughout Andy's career. It's hard to get super-excited about what the future might hold. A sad thought? I think so.

"The lack of support for things she wants to do can sometimes frustrate me because I know how good she is. I know the time and commitment she has given to growing the game in the country, getting in her van and driving to all these rural areas and deprived corners to give kids opportunities to play.

"Her energy levels are incredible, but she's getting older and she says it's now or never for this project."

With the French Open beginning this weekend, the buzz of competition has taken hold again. It's about enjoyment, yes, but mostly it's about winning.

"People ask, 'would I hit balls with friends when I retire?' And I think I would find it hard to. All my life, every time I've stepped on to a tennis court it was to win. If I was just doing it to be active and there was no pressure, my mind wouldn't compute with that."

He still has the adrenaline of major competition. At 34, it's not quite now or never for Murray to win a title in Paris - his former doubles partner Bruno Soares just won the US Open doubles crown at 38 - but his last men's doubles title was away back in 2016.

Their story is one for the here and now - and for eternity. With every bone in your body, you hope that it isn't over yet.

You can listen & subscribe to the My Sporting Life podcast on BBC Sounds here.