The pair are close friends and both aiming for a maiden Grand Slam title when they meet at 21:00 BST on Sunday.

Zverev, 23, is competing in his first major final, while Austria's Thiem, 27, has lost his previous three finals.

"It's huge pressure for both of us. We have been working very hard for a long time to win a Slam," Thiem said.

The final at Flushing Meadows in New York will end with the crowning of a new Grand Slam champion for the first time since the 2014 US Open, when Croatia's Marin Cilic won.

The absence of 2019 champion Rafael Nadal and Swiss great Roger Federer at the behind-closed-doors Grand Slam, plus the expulsion of top seed Novak Djokovic for hitting a line judge with a ball, has given the chance for a new name to be etched on to a major trophy.

Switzerland's Stan Wawrinka was the last man outside the 'Big Three' to win the Australian Open, French Open, Wimbledon or US Open, following his win at Flushing Meadows in 2016.

Thiem 'trying not to think' about previous Slam defeats

Thiem is the favourite to take advantage of the absence of the 'Big Three' and finally land his maiden Grand Slam title.

The Austrian has lost the past two French Open finals to Nadal, who cemented his place as the greatest clay-courter of all-time by winning his 11th and 12th titles at Roland Garros.

Then he lost February's Australian Open final against Djokovic, who claimed a record eighth title in Melbourne.

So this will be the first major final where the world number three is not playing one of the game's greats.

"I won't change my mindset at all. I know what Sascha is capable of," said Thiem, who struggled with an Achilles injury in Friday's semi-final win over Russia's Daniil Medvedev.

"I will go in like in the previous six matches. From the moment Novak was out of the tournament, it was clear that there's going to be a new Grand Slam champion.

"From that moment on, that was also out of my mind. I was just focusing on the remaining guys left in the draw.

"For me, it really doesn't matter whether it's Sascha or one of the 'Big Three'. I just try to go in there and give my best."

Thiem joked after beating Russian third seed Medvedev that he might have to call Andy Murray if he lost a fourth Grand Slam final.

Britain's Murray won his first major at the fifth time of asking with victory at the 2012 US Open, adding a pair of Wimbledon titles in 2013 and 2016.

"It was really tough to digest that loss in Australia as I was super close back then. I'm happy that I gave myself a pretty short time after that another chance with the final on Sunday," Thiem said.

"Of course, it's pressure for me. At the same time I try to think not too much about it."

Zverev has long been touted as one of the next generation to eventually replace Nadal, Federer and Djokovic at the top of the men's game, but has too often shown a number of weaknesses which have led to many doubting his true credentials.

The high point of his career so far was winning the 2018 ATP Finals, where he beat Djokovic and Federer on his way to the end-of-season title.

For so long he flattered to deceive at the Grand Slams, but after reaching the Australian Open semi-finals earlier this year - where he lost to Thiem - he has gone one stage further in the only major since because of the coronavirus pandemic.

But what those two victories did show, particularly the courageous fightback from two sets down against Carreno Busta, was the German's impressive mental resolve.

"Mentally, I stayed in it," he said of Friday's win. "Even though I was down two sets to love, I stayed in it. I gave myself the best chance I could.

"I think a lot of players would have gone away. It was a Grand Slam semi-final. There's no easy matches anymore. Sometimes you have to dig deep.

"Obviously, I'm happy to be in a final. But there's still one more step to go. For me, I think it's going to be extremely difficult."

Can Thiem continue his dominance over Zverev?

A recent indicator of how the pair will match up is that semi-final meeting in Melbourne.

Thiem recovered from an energy-sapping win and a 5am finish against Rafael Nadal two days earlier to edge past Zverev in a four-set win where he nicked two tie-breaks.

Heavier groundstrokes and more experience on the biggest occasions helped the Austrian through.

"The last match we had in Australia, we were both, I mean, really, really good. It was such a close match," Thiem said.

"It's nice that I'm in front in the head-to-head 7-2. When we both step on the court on Sunday, it doesn't matter anymore.

"I expect a very tough, very open match. I guess that's what it's going to be."

Thiem has grown confidently into his role as the second seed, and then tournament favourite after Djokovic's exit, over the fortnight.

Impressively he has dropped only one set - against 2014 champion Cilic - in his previous six matches.

Another major statement was made when he saw off Medvedev, who had barely been troubled on serve throughout the tournament, in a gritty performance. 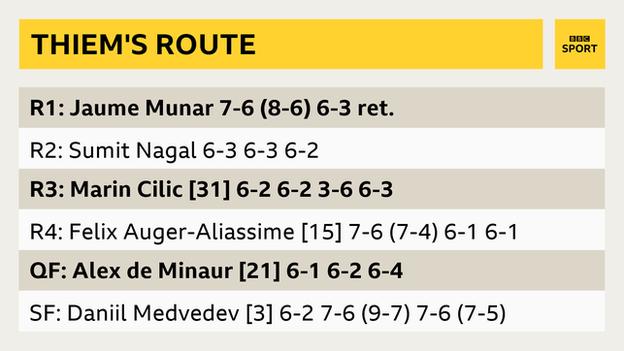 Zverev has enjoyed an easier passage to the final, helped in part by Djokovic's exit on his side of the draw.

The German, who is bidding to become the first male Grand Slam champion from his country since Boris Becker at the 1996 Australian Open, has not faced an opponent ranked inside the world's top 25. 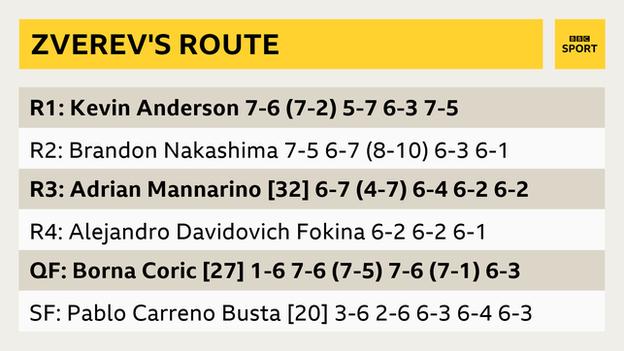