Two-time Grand Slam champion Victoria Azarenka says she is "mentally in a different place" to her last major final as she prepares to face Naomi Osaka in Saturday's US Open showpiece.

The 31-year-old Belarusian will play her first Grand Slam final since losing to Serena Williams at the 2013 US Open.

Japan's Osaka, 22, is also aiming for her third major after winning the 2018 US Open and 2019 Australian Open.

Azarenka has won her past 11 matches, while Osaka is unbeaten in 10.

The pair should have met in the final of the Western and Southern Open, which was played at Flushing Meadows immediately before the US Open, only for Osaka to pull out of the match with a hamstring injury.

Azarenka enjoying her surprise return to the top

Azarenka, ranked 27th in the world, won her first title in four years by a walkover following Osaka's withdrawal and now has a shot at an even bigger prize.

The former world number one has continued her form at the behind-closed-doors Grand Slam, surprising those who had written her off.

Azarenka took time away from the sport to give birth in December 2016 and had her comeback stalled by a lengthy custody battle over son Leo.

She had only won one match in the previous year going into last month's Western and Southern Open, admitting last week that she thought about quitting when the WTA Tour was suspended because of the coronavirus pandemic.

Instead, she is preparing to compete in her third US Open final after beating Serena Williams in Thursday's enthralling semi-final.

"Mentally I'm in such a different place. I think seven years ago, after I won the Australian Open, and playing consistently with good results, it was kind of expected for me to be in the final," said Azarenka, who lost to Williams in the 2012 and 2013 US Open finals.

"I don't think that was the case this year.

"But it feels more fun this year, more fulfilling, more pleasant for me. It feels nicer."

Former world number one Osaka struggled to cope with the increased scrutiny which came following her back-to-back Grand Slam victories at the 2018 US Open and 2019 Australian Open.

Osaka dropped to 10th in the rankings after failing to maintain those lofty heights, but the 22-year-old says she has developed more mental resilience over recent months.

That has been evident in confident runs to the two finals at Flushing Meadows.

"I would say my mindset is much different this time," said Osaka. "I feel like I've learned so much through the ups and downs, not even counting the finals, but just in the regular tournaments.

"Mentally I feel stronger, and I feel fitter now. I feel like I've definitely been getting more confident in myself. I feel like all these matches apply to each other, and once it gets to a third set, as long as I stay calm, the outcome could go in my favour."

Every time Osaka has reached the quarter-finals of a Grand Slam she has gone on to win the tournament.

"I would say the closer it gets to the finals, the more I think that no-one remembers anyone but the winner," she said.

"That's probably one of my biggest motivators."

Osaka leads head-to-head after an initial lesson from Azarenka

Azarenka outclassed a teenage Osaka when they met for the first time, the Belarusian winning 6-1 6-1 in the third round of the 2016 Australian Open.

"Honestly I'm a bit glad she beat me like this because I have so much more to learn and I can take it as a good experience," Osaka said afterwards.

Osaka has gone on to beat Azarenka in their only other two meetings.

Paths to the final

Unseeded Azarenka has faced a tough route through to the final, having faced seeded players in four of her six matches. 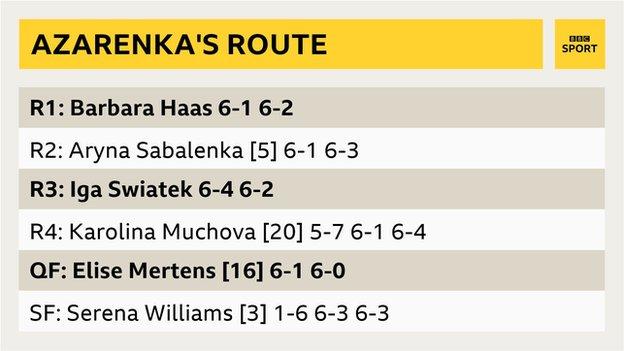 The hamstring problem which led to Osaka pulling out of the Western and Southern Open final has not hampered the Japanese fourth seed.

Although she has dropped sets in three of her matches, including in a high-quality semi-final against American 28th seed Jennifer Brady, Osaka's service games have been the bedrock of her success.

She has won 93% of her service games and 81% of points on her first serve - tallies only bettered in the women's singles by seventh seed Madison Keys, who retired from her third-round match. 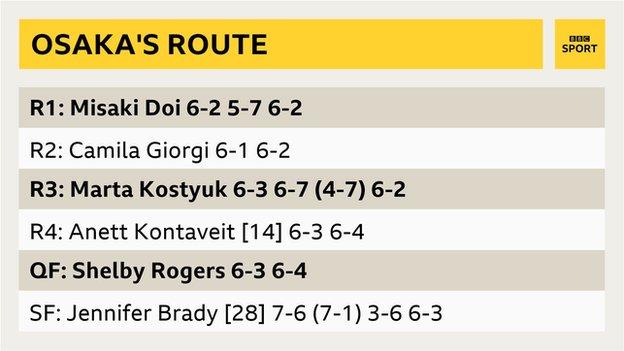