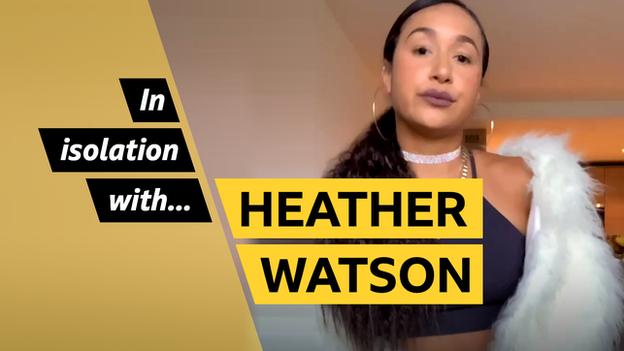 While some sportspeople have dabbled in painting or reading during the coronavirus lockdown, others have been tapping into a slightly newer phenomenon - TikTok.

In the fourth part of our 'In isolation with...' series, British tennis player Heather Watson talks about her rising fame on the video-making app.

Like millions of others across the world, I have been passing the time during lockdown by discovering TikTok. And now I'm obsessed!

That's even though I suspect that, at the age of 27, I'm a little old for it! It seems as if it is mainly younger people under 20 and famous celebrities who use the app.

But I don't care if I'm too 'old' or not. I'm having so much fun doing lots of silly videos and I'm getting positive responses from people who are enjoying watching them.

For those of you who don't have a clue what TikTok is, or who have heard of it but don't have an account, it is a fun app where you basically create videos. You can create anything.

The most popular ones are lip syncs and dance moves, but there are also cooking tips and now pop stars even use it to promote new songs.

I prefer going down the funny route and making fun of myself, dressing up and doing stupid stuff.

One of my TikTok inspirations is an American girl called Liza Koshy, who is a super famous blogger, Instagrammer, YouTuber… she is absolutely hilarious.

She is very creative in what she does and I'm a creative person too, so I'm loving doing something like this. Usually I wouldn't have the time to do it while I'm on tour.

Like everyone else, I'm not able to play tennis so lockdown means I'm staying at home in London with my boyfriend Courtney.

He is an athlete too - he plays football for Yeovil Town - so that means we both have daily fitness schedules to do to make sure we're staying in shape for whenever we can start playing again.

But it also leaves lots of time to create TikTok videos! Here are the five which I've enjoyed doing the most…

Flipping The Switch with Drake (and Courtney)

Everyone loves this one! I think it is my most popular video. But Courtney is the star of it.

So, this is where two people stand in front of the mirror, one recording and one dancing to the intro of Drake's Nonstop song.

Then when the lyric comes in, it goes dark. You literally flip the switch off. When the light comes back on you have swapped clothes and you're doing what the other person is doing.

In my video I'm wearing a super-girly, summery outfit - a crop top with frills and frilly pants - doing a cute dance.

Courtney is wearing a big puffa jacket and some grey tracksuit bottoms with his hood up, looking mean and moody.

When we flip the switch he's wearing my dress and doing a sexy dance! We had to find a stretchy one he could fit into…

He didn't take too much persuading to do that video but afterwards he got loads of stick from his friends. So now it is hard persuading him to do another one with me…

From what I've seen of her I find reality television star Gemma Collins really funny - and this video allowed me to delve into my inner TOWIE.

One of her most famous moments came on Celebrity Big Brother when she went on a rant and ended by claiming to Darren Day that she is claustrophobic.

I've never really watched TOWIE or Celebrity Big Brother, but I know this clip so I thought it would be good for one of the videos.

I don't necessarily pick a video because of the person, I pick it more because of what they are saying. This Gemma Collins clip was a bit ridiculous, becoming an iconic bit of reality TV.

So I thought I'm just going to dress up in the most bougie outfit I can find in my wardrobe. That wasn't hard because I've got the weirdest clothes - as you can probably tell.

I put on a sports bra with a fluffy coat, clipped in a hair extension, and chucked on some jewellery and lipstick.

And I enjoyed putting on an Essex accent. I do that for fun just in my house when I'm alone and bored at home anyway.

Keeping Up With The… Kardashian impressions

Again, I'm not exactly a massive fan of Keeping Up With The Kardashians but this was another scene which I thought I could do something funny with.

Most people know who the Kardashians are, it is a long-running show and it is ingrained in popular culture.

So everyone will get it straight away, even if they don't watch the show.

In this video you see me in three different outfits for a 12-second video, but honestly it doesn't take me long to get ready.

First up is Kim Kardashian and I'm wearing pink-flared trousers with a matching tie-up top. They have lemons all over it.

I don't know what I was thinking when I bought that outfit… I've never worn it. It was probably in the sale. At least it has been put to a good use now.

Next was her sister Kourtney. With her I put on a sparkly, sequinned dress, chucked some red lipstick on and took the wig off. The final one is their mum Kris Jenner - I put the wig and glasses back on.

I've never done any acting before, but my friends would say if any of us were to be an actress then it would be me - because I'm pretty dramatic.

Could it be magic?…

I joked the impersonation of Gemma Collins was the start of my acting career and I want to do everything now because of TikTok - acting, singing, dancing, magic…

I just scroll through the trends on the app and pick ones which I think I can be creative with, some of them are just so random.

One of my most watched videos was my first magic trick. I've never been into magic before this either.

Basically, what I do is… actually, I won't spoil the illusion! Just watch the video below…

Blowing up on TikTok

After Courtney got stick for the 'Flip The Switch' video, I've had to negotiate extra PlayStation time for him to do more TikTok videos with me.

We did the Couples Challenge, where you are asked questions like 'who initiated the first kiss?', 'who is the funny one?' and 'who is grumpiest in the morning?', then both point to who you think the answer is, without looking at each other. I think we did pretty well.

I also got him to do one which uses 'bubbleheads', where our heads are blowing up while we are singing Soulja Boy's 'Hey You There'. It is so funny.

The lockdown is a difficult time for everyone so it is a bonus other people think my videos are funny too and are being cheered up by them.

I am loving doing the videos and will continue to do them to stay creative until I can play tennis again. Enjoy!