Serena Williams is the firm favourite to win the Australian Open as she again bids for a record-equalling 24th Grand Slam singles title.

The 38-year-old American is aiming to match the record set in 1973 by Australia's Margaret Court, who will be recognised at the tournament on the 50th anniversary of her calendar Grand Slam.

Old guard Novak Djokovic, Rafael Nadal and Roger Federer are still expected to be the men to beat in Melbourne, while Britain's former world number one Andy Murray is missing because of a pelvic injury.

The first Grand Slam of the 2020 season is set to go ahead as planned, despite the backdrop of raging bushfires that have devastated parts of Australia.

Here is everything you need to know.

For the eighth time in the past 10 Grand Slams, three-time major champion Andy Murray is unavailable to lead British hopes.

Murray, 32, was hoping to make a poignant return to Melbourne - where he tearfully admitted last January he thought his career was coming to an end because of chronic hip pain.

Since then, the Scot has had "life-changing" hip surgery, returned to competitive action and won ATP Tour titles in singles and doubles events.

Now he must wait a bit longer to return to Grand Slam singles competition after picking up a pelvic injury while playing for Great Britain at November's Davis Cup finals.

"Unfortunately I've had a setback and as a precaution need to work through that before competing," said the former world number one, who is planning to be back in action in February.

"I've worked so hard to get myself into a situation where I can play at the top level and I'm gutted I'm not going to be able to play."

Can any of the other Britons mount a challenge?

Britain's best hope of winning a first Australian Open singles title since Virginia Wade did so in 1972 looks to be Johanna Konta - if she is not hampered by a long-term knee issue.

Konta, ranked 13th in the world, reached at least the quarter-finals in three of the four Grand Slams last year.

Although the Australian Open was the only major where she did not compete in the last eight, the 28-year-old does have previous success in Melbourne, having reached the 2016 semi-finals.

The knee problem has disrupted the British number one's build-up, however, ruling her out of this week's Adelaide International and limiting her to only one tournament since September's US Open.

Joining Konta in the women's draw will be Katie Boulter, who is using her protected ranking of 85 to play after an injury-hit 2019 meant she dropped to 317th.

British number two Heather Watson is ranked 101 in the world, and was just outside the initial cut for direct entry, but has moved into the main draw automatically following several withdrawals by higher-ranked players.

Harriet Dart and Samantha Murray Sharan are seeking to join them by coming through the qualifying rounds.

In Murray's absence, British hopes in the men's singles are in the hands of 30th seed Dan Evans, Kyle Edmund and Cameron Norrie.

Evans, 29, is the nation's leading male player after a fine 2019 in which he climbed back into the world's top 50 by getting to his first ATP Tour-level final and playing in the main draws of all four Grand Slams in the same calendar year for the first time.

Now, having reached a career-high ranking of 33 on Monday, he goes into a Grand Slam for the first time as Britain's leading male player and a seed.

Edmund, 25, is hoping a new coach in Franco Davin, who notably helped his fellow Argentine Juan Martin del Potro win the 2009 US Open, can help him replicate the form that took him to the Australian Open semi-finals in 2018.

The Yorkshireman slid down the rankings during a 2019 where he suffered for form and fitness before ending the year on a high by being Britain's standout player in their run to the Davis Cup semi-finals.

In the men's doubles, Jamie Murray and Neal Skupski will be seeking to build on the promise they showed in their new partnership last year, when they reached the US Open semi-finals. 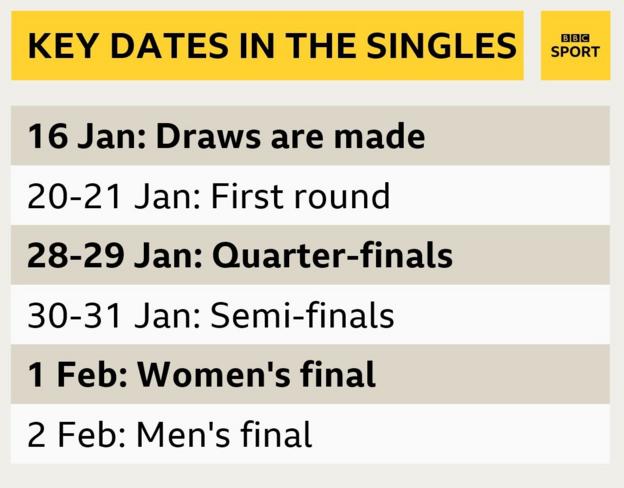 It may be a new decade - but just as it was during the 2010s, and the latter part of the 2000s, the same three men are widely considered the main contenders to win the first Grand Slam of 2020.

Defending champion Djokovic, world number one Nadal and 20-time Grand Slam winner Federer remain the players to beat, having won the past 12 major titles between them.

Djokovic is aiming for a record-extending eighth men's singles title in Melbourne and showed just why he is so difficult to beat on the Australian hard courts, having led Serbia to glory in the inaugural ATP Cup.

The 32-year-old, who is aiming for a 17th Grand Slam title to close on Federer and 19-time major champion Nadal, dropped only two sets in his six singles matches, which included another dominant win over the Spaniard in Sunday's final in Sydney.

Nadal, 33, was outplayed by Djokovic in last year's Australian Open final and continues to struggle against the Serb, who has won their past nine encounters - and 19 sets - on hard courts.

As the top two seeds, they are projected to meet in the final on 2 February, although players such as Swiss great Federer, Russia's Daniil Medvedev and Greece's Stefanos Tsitsipas have the capability to stop them.

It remains to be seen whether Federer, 38, was wise to skip the ATP Cup, a decision intended to preserve his body for Melbourne, but one that leaves him short of court time going into the tournament.

Fourth seed Medvedev, 23, pushed Nadal in September's US Open final before losing an epic five-set match and, given his strong hard-court record over the past year, it seems a matter of time before he becomes a major winner.

The same can be said for 21-year-old Tsitsipas, who showed he can beat the best by becoming the ATP Finals champion in November and is looking to at least match his run to last year's semi-finals in a city where there is a large Greek community spurring him on. 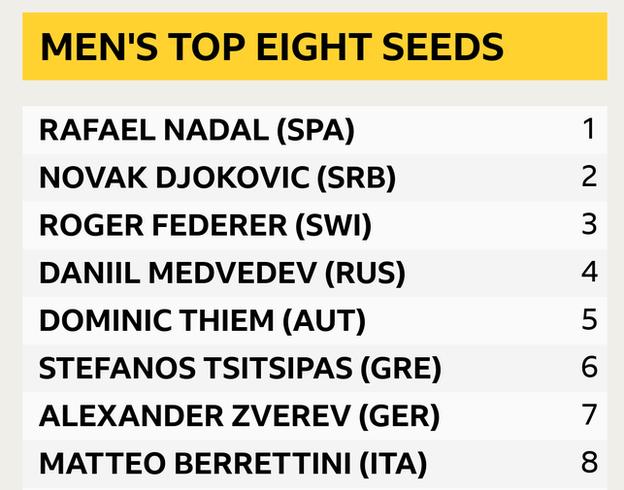 Williams has not won a Grand Slam title since the 2017 Australian Open, when she was eight weeks pregnant.

Since returning from maternity leave in March 2018, she has reached four Grand Slam finals - two at Wimbledon and two at the US Open - losing them all.

But she goes into this tournament as the clear favourite, having rediscovered how to win a final.

"It's been a long time; I think you could see the relief on my face," she said.

Williams' drought has helped open up the women's game; the past 11 Grand Slams have produced nine different winners, over a period that has seen seven players hold the world number one ranking.

Younger players have grasped their chance over the past three years, with 22-year-old Japanese Naomi Osaka and 19-year-old Canadian Bianca Andreescu both landing their first majors by beating Williams in New York, while the more experienced Caroline Wozniacki, of Denmark, and Simona Halep, of Romania, finally landed elusive Grand Slam titles.

Osaka, the defending champion in Melbourne, is expected to mount another title tilt on a surface that yielded a 14-match winning streak before she lost to Czech Karolina Pliskova in the Brisbane International semi-finals on Saturday.

Andreescu will not be playing in Melbourne, having pulled out with a knee injury sustained at the season-ending WTA Finals in October.

World number one Ashleigh Barty is aiming to become the first Australian woman to win at Melbourne Park in 42 years, while second seed Pliskova, having won the Brisbane title for the third successive year, is aiming prove wrong those who doubt she has the mindset to deliver a Grand Slam title.

Meanwhile, there will be an emotional farewell for 2018 champion Wozniacki, 29, who will retire after the tournament. 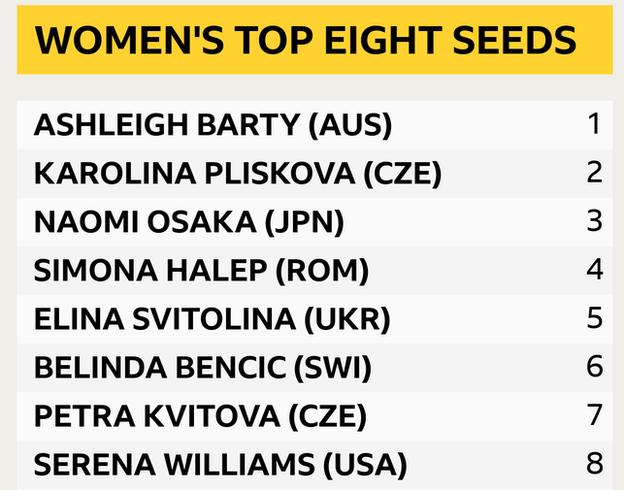 Has the tournament been affected by the bushfires?

Bushfires across Australia have killed at least 28 people and an estimated half a billion animals since September, with more than 10.3m hectares of land destroyed and air quality in some areas reaching dangerous levels at various points.

Australian Open qualifying was delayed by an hour on Tuesday and practice was temporarily suspended because of the air quality, while Slovenian player Dalila Jakupovic retired from her qualifier, saying she was "really scared" she was going to collapse because of the "unhealthy" air.

However, they were also confident the tournament would not be disrupted by the crisis.

"We don't expect any delays and we've implemented additional measures to ensure the Australian Open will be able to run as scheduled," tournament director Craig Tiley said.

"As always, the health and safety of our players, along with our staff and our fans, is a priority, and we've committed substantial extra resources to analysis, monitoring and logistics to ensure this throughout the tournament."

Court's milestone being 'recognised' rather than 'celebrated'

While Williams seeks to match Court's Grand Slam singles record, the 77-year-old Australian will be marking one of her other milestones - the 50th anniversary of her 1970 sweep of all four of the majors.

Court's opposition to same-sex marriage and her view that transgender children are the work of "the devil" have made her a controversial figure and Tennis Australia has said it plans to "recognise" her as a champion rather than "celebrate" her as a hero.

The governing body has so far been vague on the details of what it is planning for Court, who is now a Christian pastor.

Grand Slam winners Martina Navratilova and Billie Jean King are among those who have called for the Margaret Court Arena at Melbourne Park to be re-named because of her views and the issue could come up again with the Australian invited to participate in a "significant programme of events".