Australian number two Nick Kyrgios says it is "tough" to see the impact of widespread bushfires in the country after he raised 4,000 Australian dollars to help tackle the issue.

Kyrgios, 24, has pledged to donate 200 dollars for every ace he hits at every tournament he enters in January.

He hit 20 aces in his ATP Cup match against Germany's Jan-Lennard Struff.

"I don't care about the praise too much. We have the ability and platform to do something," Kyrgios said.

World number 30 Kyrgios, along with a number of other players, are donating money for every ace hit in events held in Australia in January to help those affected by the bushfires.

Tennis Australia has committed a 100 Australian dollar (£53) donation for every ace served at the ATP Cup in Brisbane, Perth and Sydney.

The first day of the tournament saw $21,600 (£11,500) raised for the Australian Red Cross bushfire disaster relief after the players hit 216 aces. Big-serving American John Isner served out more aces (33) in his match against Norway's Casper Ruud than any other player.

Kyrgios said: "I just chucked up a tweet and everyone got behind it. It is bigger than tennis.

"It's going to all the families, firefighters, animals, everyone who is losing homes, losing families. It's a real thing.

"My hometown is Canberra and it's got the most toxic air in the world. That's sad. It is tough."

Kyrgios is one of the players taking part in a specially arranged exhibition match in Melbourne to raise funds for bushfire relief.

The exhibition match at Rod Laver Arena on Wednesday, 15 January is one of a number of fundraising events before the Australian Open.

Tennis Australia says "many of the world's best players" will take part, with others involved to be revealed in the coming days.

"It is heartbreaking to see the devastation the bushfires are wreaking across the country," said Tennis Australia boss Craig Tiley.

"We are working closely with the top players and have already had a great response, with many of them keen to help this incredibly important cause."

The Apis Canberra International tournament, which is an men's ATP Challenger and women's ITF event, will relocate to Bendigo because of the fires in the region.

British player Katie Swan is set to play in the event and expressed her sympathies to those affected in what she described as a "terrible time". 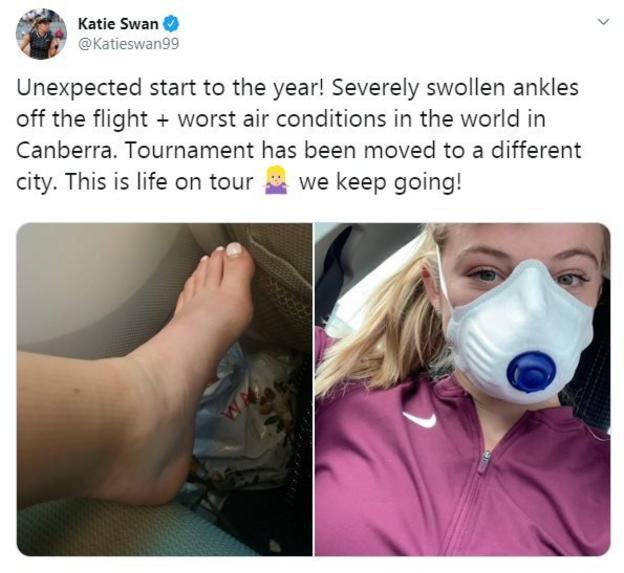 The Australian navy has evacuated around 1,000 tourists and residents who were trapped in the fire-ravaged town of Mallacoota on the Victoria coast, about 300 miles east of Melbourne.

Thousands of people are also fleeing parts of neighbouring New South Wales, where a week-long state of emergency is in force.

Since September, fires have killed at least 20 people in the two states and dozens remain missing.

The Australian Open, which is the first Grand Slam of the year, starts in Melbourne on 20 January.

Meanwhile, leading Australian horse racing jockeys say they will donate winnings this month to those affected by the bushfires.

The multiple Group One-winning Sydney rider Tommy Berry has pledged 250 Australian dollars (£133) for every winner in January to the Red Cross Bushfire Appeal.