With Rafael Nadal falling flat on his back on the baseline, his triumphant team-mates running on court to pile on top of him and a partisan home stadium rocking with pride, it was a familiar scene as Spain lifted the Davis Cup.

Yet, while the celebrations were similar to many we have seen in previous years, the host nation's first success since 2011 came at the end of a very different week in Madrid.

Unlike in the past, Spain's victory over Canada was not the only Davis Cup tie to take place in November as the tournament culminated. Instead it was the end of an 18-nation finals self-styled as the 'World Cup of Tennis'.

The football-style knockout tournament, a bold concept conceived and financially backed by Barcelona defender Gerard Pique and his Kosmos investment group, faced a barrage of criticism before it had even started.

And, as with any new event, especially one of such size and stature, there were teething problems in the Spanish capital.

But there were also many memorable moments in what proved to be a high-quality tournament on the court.

Here, BBC Sport analyses what worked in the new-look finals, what perhaps didn't and the lessons that must be learned before next year's event.

The star names sprinkle stardust on the new finals

For years, the common consensus had been the 119-year competition needed to change.

Top players, worried about burn out on the punishing ATP Tour, were regularly not turning out to play in a 16-team world group that saw home and away ties spread over four weekends throughout the year.

Pique, a tennis fan said to have been a promising junior player, was the catalyst for change.

But his intervention, and the changing of a tradition which had existed in the previous format since 1981, was not welcomed by tennis die-hards, including the most recognisable player on the planet.

Swiss great Roger Federer resisted the change and urged that the competition should not become the "Pique Cup".

While the 20-time Grand Slam champion was not present in Madrid after Switzerland failed to qualify three of the other 'Big Four' did play.

The presence of so many key players was seen as an encouraging sign by Pique and ITF chief David Haggerty.

"When we started a few years ago with the project of the new format, what we wanted basically was that the top players participate in the competition. I think that was a fact," Pique said.

"You saw here the top players playing and representing their countries."

Whether that will continue to be the case largely depends if a merger with January's 24-nation ATP Cup - created by the men's tour and attracting all the top-ranked players except Federer - can ever be agreed to avoid a situation where two men's team events take place within close proximity of each other.

Try telling those competing in Madrid - and their compatriots who had spent time and money travelling there - that the new format had devalued the competition as some suggested.

World number one Nadal tore around the Caja Magica as he won all eight of his singles and double rubbers to inspire the Spanish.

Novak Djokovic along with the entire Serbia team were left close to tears following a dramatic quarter-final loss to Russia. In an emotional news conference post match, Djokovic's doubles partner Viktor Troicki - who played a woeful third-set tie-break - said he felt "the worst ever" after been given the chance to "be the hero, only for God to take it away".

Former world number one Andy Murray was contorted with nervous emotion as he watched his older brother Jamie and Neal Skupski try to put their nation into the final by beating Nadal and Feliciano Lopez in a decisive doubles rubber.

And try telling Spain's Roberto Bautista Agut, who was left in tears after winning his singles rubber against Canada three days after the death of his father, that representing his country was still not of significant pride and honour.

Fears the emotion could be sucked out of the competition proved wide of the mark, although it remains to be seen what a finals weekend without the host nation competing would look like.

Empty seats for most matches - give them to the kids?

Patriotism was not in short supply in the stands either.

Clearly that peaked during the Spanish ties where the Caja Magica stands were a sea of red-and-yellow flags as the partisan home crowd, encouraged to make noise by a jaunty brass band and a man barking out instructions through a football terrace-style megaphone, willed their team towards a first Davis Cup triumph since 2011.

That understandably gave those matches a flavour of the 'old' Davis Cup - and an advantage to Spain.

While some other teams were well backed - notably Great Britain, Canada and Kazakhstan, thanks to the help of their national federation - other matches were played out in half-full arenas.

The Lawn Tennis Association (LTA) offered 875 free tickets to British fans for the semi-final against Spain - at a cost of about £60,000 - and British captain Leon Smith thinks there should be an arrangement between organisers and the governing bodies of all 18 finalists to subsidise support in the future.

"The most important thing about Davis Cup is obviously trying to maintain the atmosphere," he said.

"Why doesn't that become the norm that there's X amount of investment given to each federation to get a core group of fans?"

Spain's two group games and Sunday's final were the only ties to officially sell out the 12,500 capacity Manolo Santana court, according to the tournament's online ticket portal.

"I do think the organisers missed an opportunity there by not giving the unsold tickets to schoolchildren and getting them in to watch the matches," British player Jamie Murray said in his BBC Sport column.

"That would have been a good idea and would have exposed young kids - the future of the sport as potential players and fans - to tennis." 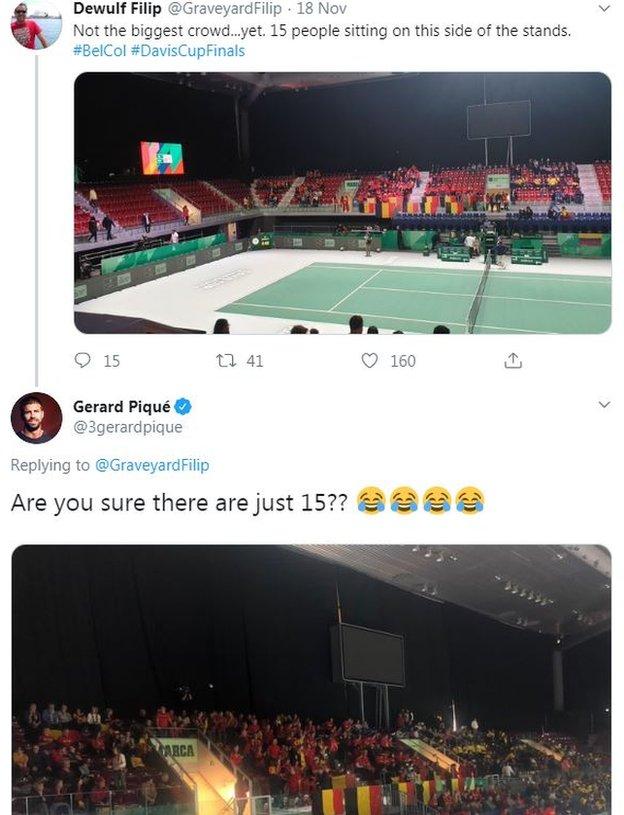 A second venue in Madrid would prevent 4am finishes

While Spanish custom dictates the nation generally stays awake until the early hours, a major problem which arose was ridiculously late finishes in some matches with ties outlasting all but the most nocturnal of fans.

The group tie between the United States and Italy was the most startling, eye-rubbing example, finally ending at 04:04 local time to become the second latest finish in top-level tennis history behind Lleyton Hewitt's win over Marcos Baghdatis at the 2008 Australian Open which ended at 4:33am.

"We expect that some games will be finished late, but obviously 4am was too late," Pique said.

"That day all the games, they were very long.

"But we will have to be more creative in the future. I think this is not a big issue. It's something we have to think how we do it."

Britain's Jamie Murray has suggested the finals should be split across two venues in Madrid next year, enabling one court to host one tie every day rather than two sessions.

When asked if the Spanish capital's WiZink Center could be used next year, or where a fourth court could be built at the Caja Mágica, Pique said both options "are right now are on the table". 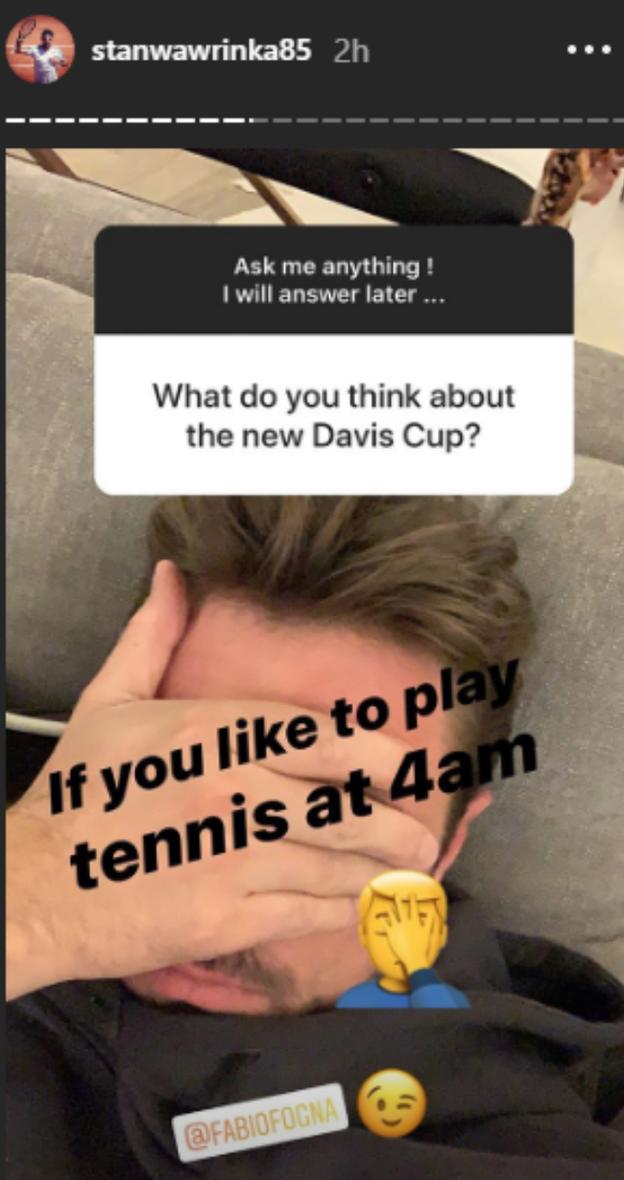 Too focused on TV fans and not those there?

Between 800 and 1,000 British fans roared their team on in each of their four matches, with some staying for the whole week in the hope of seeing the 2015 champions end victorious again.

The majority of supporters appeared to savour the sense of occasion that mixing with fans from all over the world brought, although a large portion still bemoaned the loss of the previous home-and-away format.

"It is a fantastic atmosphere, we've talked to people from loads of different countries," said Pam Flatman, who flew over from Norfolk with husband Wayne and their friend Mac Boreham. "It brings people together and from that perspective it's a good thing."

One common gripe among fans of all nationalities was they felt the tournament was more geared towards the needs of armchair fans than those actually in Madrid.

"There are no screens dotted around, so there is no information from the other matches," said Mac. "At Wimbledon you know what's happening but here you know nothing."

Pam added: "Scoreboards and TVs outside in the concourses are necessary - and more outside heaters because the Madrid winter can be very chilly. It's been freezing standing out here."

The tournament also ended with a tinge of disappointment for fans at the venue. Spain lifted the trophy with many supporters having already left the arena, unwilling to sit through an unnecessarily elaborate and time-consuming setting up of the presentation stage.

Those trying keeping up-to-date with the action from afar reported a series of issues.

While British number one Dan Evans' profile featuring a faceless image instead of a photograph like everyone else was not the end of the world, nor was Germany's team page describing Zverev - absent and a harsh vocal critic - as the 'star of their team', the fundamental ability to update scores and competing players correctly was a failure.

Often, the scores of matches were wrong and slow to update, while Britain were apparently represented by Argentine Guido Pella in their quarter-final against Germany.

Selling television rights proved to be a problem in some major markets, with the tournament not shown on a major American broadcaster and only being available to British television audience at a late stage when Eurosport stepped in to secure the rights.

Another peculiarity was the decision to set up new Twitter and Instagram accounts under the 'Davis Cup finals' banner rather than use the existing Davis Cup accounts which have a combined 500,000 followers.

Although the behind-the-scenes content was excellent - fun, interactive and engaging - and retweeted by the main Davis Cup accounts in a bid to build the brand, the new accounts only had a combined 60,000 followers which leads a suspicion that reach was not as wide as it could have been.

"Our vision is to make sure this is seen in as many places by as many people and followed around the world. That's something that, again, is something we can improve," Pique added.