Roger Federer says his crucial match with Novak Djokovic at the ATP Finals on Thursday is "a chance to get him back" for this year's Wimbledon final.

The pair have not met since Djokovic saved match points to win Wimbledon's longest singles final in July.

Whoever wins on Thursday will progress to the last four of the season-ending championships in London with the other eliminated at the round-robin stage.

The Wimbledon final lasted four hours 57 minutes and was decided on a fifth-set tie-break after Federer had match points on his serve in the final set.

Asked if he still had bitter memories about the loss, Swiss Federer said: "We'll find out, but I think it's all flushed away from my side.

"I think we both can take away some confidence from the match. Him obviously a lot. Me maybe a tad bit less.

"But at the end of the day, I didn't hope I was never going to play him again.

"Actually, it's good for me to play him again, and maybe that all helps to get a chance to get him back or whatever it is." 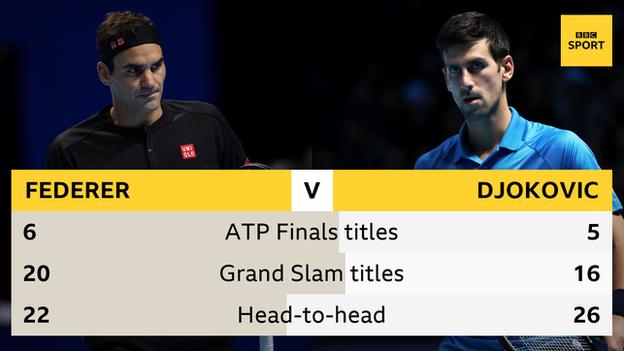 Djokovic, who has won his last four meetings against Federer, is aiming to equal the Swiss' record tally of six ATP Finals titles.

The 32-year-old is also trying to overhaul Rafael Nadal as world number one but must win the tournament to do so after the Spaniard saved match points to beat Daniil Medvedev on Wednesday.

Both Federer and Djokovic have beaten Matteo Berrettini in their group but lost to Austria's Dominic Thiem, meaning they need to win on Thursday to progress.

Former British number one Tim Henman says Djokovic is the favourite for the 48th meeting between the pair who have won 36 Grand Slam titles between them.

"He's won quite a few of their more recent encounters," Henman said.

"Federer looked better against Berrettini [than against Thiem] but he is going to have to up his game again, but if anyone can Roger can."

Thiem and Greece's Stefanos Tsitsipas have already booked their places in the semi-finals.

Britain's Joe Salisbury and American partner Rajeev Ram are in doubles action again on Thursday against Lukasz Kubot and Marcelo Melo with the winner progressing to the last four.