Roger Federer and Rafael Nadal will try to tee up their first Wimbledon meeting since the epic 2008 final when they headline the men's quarter-finals.

In the mixed doubles, Andy Murray and Serena Williams will be third on Court Two for their last-16 match against top seeds Bruno Soares and Nicole Melichar.

Federer, who turns 38 next month, is the oldest player in a last-eight line-up featuring five players aged over 30, while Nishikori and Goffin are the youngest men left in the draw at the age of 28.

The Swiss great is aiming to become the oldest men's Grand Slam semi-finalist since American Jimmy Connors at the 1991 US Open. 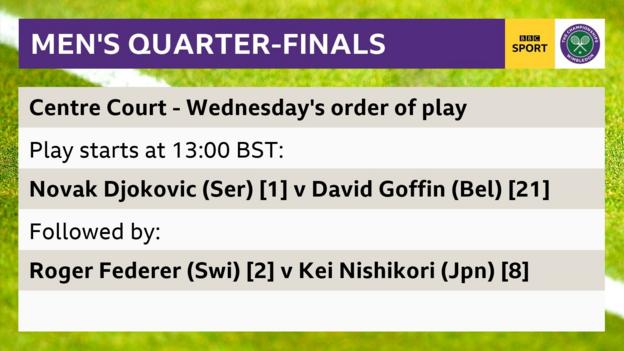 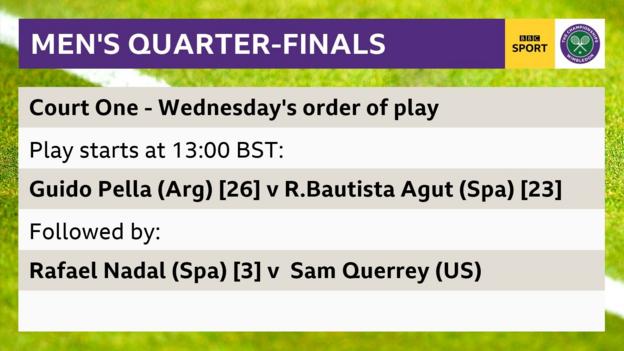 The old guard continue to lead the way

How the men's game will look when the power of Federer, Nadal and Djokovic eventually diminishes is something which has been discussed at length for a number of years now - and we are still no closer to knowing when that day will arrive.

The 'big three' have won the past 10 Grand Slams between them - Stan Wawrinka at the 2016 US Open was the last winner not from the trio - and few are looking past one of them lifting the Wimbledon trophy again on Sunday.

All three have sailed through the SW19 draw so far, dropping just one set apiece in reaching the quarter-finals.

"I think the best guys now are fully engaged, they know exactly what to expect from the court and the conditions. That helps us to play better," said Federer, who is bidding to reach his 13th Wimbledon semi-final.

"We haven't dropped much energy in any way. It's not like we're coming in with an empty tank into the second week.

"All these little things help us to then really thrive in these conditions."

Federer is aiming to earn his 100th win at the All England Club against Nishikori, and in doing so, will become the first player in singles history to do so at a single Grand Slam.

Goffin has matched his best performance at a Grand Slam by reaching his first Wimbledon quarter-final, but trails 5-1 in his head-to-head record with four-time champion Djokovic.

The Belgian's coach Thomas Johansson, who famously earned a shock Australian Open title in 2002, said it is "almost impossible" to find any weaknesses in Djokovic's game.

"He doesn't have a big serve but it is very, very accurate. From the baseline he's a wall," the Swede said.

"I remember hitting with him many years ago - it's like hitting against a spider. It feels like everything is coming back.

"You really have to try to put him in uncomfortable positions on the court - otherwise he will kill you."

In reaching the semi-finals, Djokovic would join Boris Becker, Arthur Gore and Herbert Lawford in third place on the all-time list for last-four appearances at the All England Club.

Victory would also mark his 70th match win at Wimbledon, and would make him only the fourth man in the open era to achieve the feat after Federer, Becker and Connors.

Querrey will be playing his third Wimbledon quarter-final in four years and looking to cause another upset after beating Britain's Andy Murray - who was injured and has not played in the singles at Wimbledon since - to reach his second semi-final in 2017.

The 32-year-old American is the only unseeded player in the men's singles quarter-finals and has thumped down 100 aces so far at this year's tournament, dropping just one service game and landing 86% of his first serves.

"My serve feels really good. I'm kind of locked in on it. I have got a good rhythm," he said.

"This is a tournament that rewards good servers. Everything feels right on my serve."

While Djokovic, Federer and Nadal take all the plaudits, 32-year-old Bautista Agut is actually the only man left who has not dropped a set yet.

His meeting with Pella marks their first on grass, and he would become only the sixth Spanish man in history to reach the Wimbledon semi-finals.

Pella, meanwhile, would become the third Argentine man to do so, with both yet to experience a last-four tie at a Grand Slam.

118 comments
Back to top
unknown