Andy Murray and Serena Williams began their blockbuster partnership with a confident win in the Wimbledon mixed doubles on a buzzing Centre Court.

Britain's Murray and American Williams eased to a 6-4 6-1 win over unseeded Andreas Mies and Alexa Guarachi.

The high-profile pair had too much quality for their battling opponents and will meet 14th seeds Fabrice Martin and Raquel Atawo in the second round.

Earlier, Murray lost alongside Pierre-Hugues Herbert in the men's doubles.

But several hours later, there were contrasting emotions for the Scot - the three-time Grand Slam singles champion - as he and 23-time major winner Williams breezed past their German-Chilean opponents in one hour and 16 minutes.

"After losing earlier in the men's doubles, all the energy is the focused now on the mix," Murray, 32, said. "We played well, returned well and served well - it is a great start."

Williams, 37, added: "I think it worked out well, We had never played together, so it is always a learning curve. We wanted to start fast and we take it very seriously."

The tantalising partnership between two of the sport's most recognisable stars has been one of the main talking points at Wimbledon since it was first mooted last week and then finally confirmed on Tuesday.

Anticipation was bubbling around the grounds all day - particularly on Centre Court, where many ticket holders felt confident they were going to see Murray and Williams in tandem.

That was despite the match not being assigned to a court, and not to be played before 17:30 BST, as Wimbledon organisers waited until the picture became clearer on the main show courts before deciding where to put one of the most anticipated mixed doubles matches in years.

Quick victories for Ashleigh Barty, Rafael Nadal and Roger Federer on Centre left the path clear and when their impending arrival was announced, shortly after the Swiss beat France's Lucas Pouille in straight sets, the 15,000-seater arena broke out into manic cheers.

More followed when they strode out into a court together where they have enjoyed some of the finest moments of their career and the party atmosphere continued throughout a win wrapped up in fading light about 20:30 BST.

Can Ser-Andy go all the way?

For two-time Wimbledon singles champion Murray, the high-profile partnership represents another chance to win a title at SW19, this time less than six months after having hip surgery.

As well as being two of the leading singles players of their generation, both have rich doubles pedigree and gelled together seamlessly as they thrashed unseeded pair Mies and Guarachi.

Williams won the Wimbledon mixed doubles in 1998, and has claimed six women's titles partnering older sister Venus, while Murray has also enjoyed success in the format, notably alongside his brother Jamie as they helped Britain win the 2015 Davis Cup.

Despite only hitting together for the first time 24 hours earlier, the ease with which they quickly gained an understanding was an ominous sign for the rest of the field.

Typically strong serving from Williams complemented Murray's returning game, while both players pounced around the net and produced some sharp volleying skills.

While there were plenty of fun moments - notably when Williams broke into laughter as she scrambled on the floor trying to get up at the net - there was a steeliness which was to be expected by two of the game's most dogged players.

A break in the opening game of the match was enough to take the first set, meaning 10 other missed chances were inconsequential, before they took four of their seven opportunities in a clinical second set.

"We're obviously here to do well, but have fun at the same time," Williams added.

Laughing about her slip, she added: "I was going to get back up. I saw a ball coming towards me, so I just kind of went back down. Then I couldn't get back up after that.

"So I decided to just stay down and let Andy do all the running." 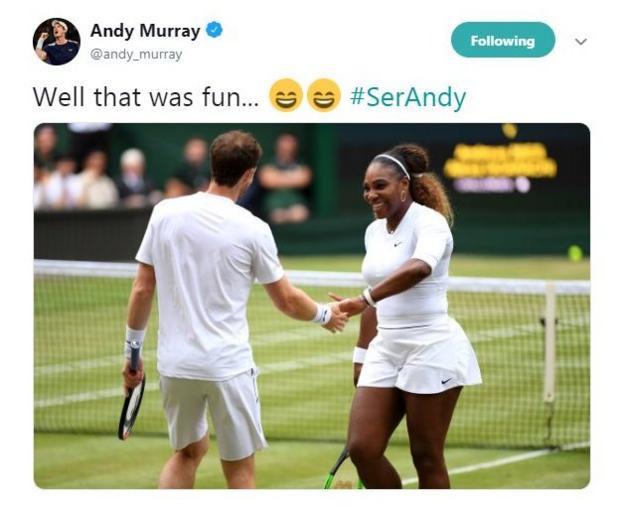 'They played some high-quality tennis' - analysis

Andy and Serena had a nice presence out there. You could see as the match went on they worked better and better together.

In the end they played some high quality tennis, served well, returns were firing and some nice moves at the net.

Murray and Herbert fail to build on promising start

Murray, 32, made a triumphant return when he and Herbert earned a men's doubles comeback win over Romania's Marius Copil and France's Ugo Humbert, recovering from a slow start to enthral a boisterous Court One on Thursday by winning in four sets.

But this time the mood on a packed court two, one of the smaller show courts at the All England Club, faltered as Murray and Herbert's second-round match swung in the opposite direction against Croatian sixth seeds Nikola Mektic and Franko Skugor.

The partnership failed to ignite in the same way that Murray's triumphant pairing with Spain's Feliciano Lopez did at Queen's, with an almost innate understanding between doubles specialists Mektic and Skugor proving too much as they won 6-7 (4-7) 6-4 6-2 6-3.

Initially it looked as if it could be another positive outcome for Murray and Herbert, who edged an even first set after a crisp cross-court backhand winner from Murray swung the tie-break in their favour.

But 28-year-old Herbert, who has won all four Grand Slam doubles titles after success with his previous partner Nicolas Mahut, continued to struggle with his returning game in the second set and then crucially saw his serve taken for their opponents to level.

From that point Mektic and Skugor took control as Murray and Herbert's service game waned, the Croatians breaking three more times in the next two sets to reach the third round.