Britain's Andy Murray has confirmed he will play mixed doubles with Serena Williams at Wimbledon.

Murray, a two-time singles champion at SW19, will compete in both the men's and mixed doubles less than a month after returning following hip surgery.

The pair are expected to play their first match together on Thursday. 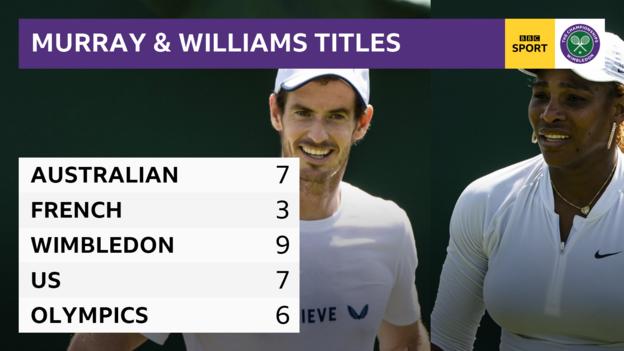 Murray, who won Queen's with Feliciano Lopez, will partner Frenchman Pierre-Hugues Herbert in the men's doubles.

The Scot was turned down by world number one Ashleigh Barty before suggesting he might pair up with 37-year-old Williams, who has won seven doubles titles at Wimbledon.

Murray said: "Serena is obviously a brilliant player, has a great doubles record and is brilliant on grass obviously. She's arguably the best player ever."

Laughing, he added: "So she'd be a solid partner."

The only issue will be whether the American's knees will cope with the extra demands of playing doubles as well as singles - and whether Murray's fitness holds up to what will be a packed doubles programme if they have a good run.

Williams has struggled with a knee injury this year but beat Giulia Gatto-Monticone on Tuesday.

Murray played mixed doubles at Wimbledon in 2006 where he teamed up with Belgium's Kirsten Flipkens and reached the second round.

He was also a silver medallist with Laura Robson in the London 2012 Olympics which were played at the All England Club.

Williams is a two-time mixed doubles Grand Slam champion, having partnered Max Mirnyi to win Wimbledon and the US Open in 1998.

Some 64 pairings compete in the mixed doubles, which is played over the best of three sets.

Just before the pairing was confirmed, Williams had remained coy about the prospect at a news conference following her first-round singles victory.

Journalist: "When do you think you could make that decision? Next three hours? In the morning?"

Williams: "This is crazy. I don't know. I'm still kind of in the singles mode, trying to figure that part out. We'll see. I could use extra matches, though, so... could be something."

Journalist: "Could you give us a rough percentage of how likely you think it is you would play with Andy?"

Williams: "I don't know. If you guys really want it, then maybe I'll do it."

Journalist: "We do really want it."

Asked what she likes about Murray, Williams replied: "We're a lot alike on the court! I've always liked that about him.

"Talking about work ethic... His work ethic is just honestly off the charts. That's something I've always respected about him. His fitness, everything.

"To do what he's done in an era where there's so many other great male tennis players, so much competition, to rise above it, not many people have done it.

"There's so many things to be admired. Above all, he really stands out, he really speaks up about women's issues no matter what. You can tell he has a really strong woman in his life. I think above all that is just fantastic."