Djokovic was bidding to become the first man in the Open era to hold all four major titles at once on two separate occasions.

"[It was] one of the worst conditions I have ever been part of," he said.

Friday's play was suspended once, then cancelled because of wind and rain in a move criticised by former players and journalists, who pointed out that the skies later cleared with daylight still left.

The defeat ended a run of 26 Grand Slam match wins in a row for 2016 champion Djokovic and the Serb said the weather affected his form.

"When you're playing in hurricane kind of conditions, it's hard to perform your best," said the 15-time Grand Slam champion.

"It's really just kind of surviving in these kind of conditions. That's what it felt like playing yesterday, to be honest.

"I don't want to point out some reasons or find excuses for this loss. I mean, he took it, he won it, and well done to him."

Four days in a row for Thiem

Fourth seed Thiem, who had never beaten a world number one at a major before, will face 11-time champion Rafael Nadal on Sunday, a repeat of last year's final.

The 25-year-old had already been affected by the weather at Roland Garros, playing his quarter-final on Thursday after rain also stopped play on Wednesday.

Nadal's semi-final win over Roger Federer took place earlier on Friday so was not affected by the suspension, while Thiem wrapped up victory on Saturday afternoon after the third break in play because of rain.

Thiem's coach Nicolas Massu said he would prefer the final to be played on Monday, given Sunday will be the fourth consecutive day the Austrian has played.

But Thiem, who is the first Austrian player to reach a second Grand Slam final, said he would be ready in time.

"I think it's fine. It's not the first time that that happens in tennis, and it's not going to be the last time. That's our sport," he said.

Djokovic was agitated from early in the match. In the first set, he asked the umpire whose responsibility it was to decide whether it was too windy to continue, but play carried on and he dropped a set for the first time this tournament.

An umbrella had blown across the back of the court during the match and Djokovic spoke angrily about this during his post-match news conference.

"When the supervisor came on the court, he said as long as there are no flying objects coming on to the court, we're good," he said.

"I didn't know that an umbrella is not a flying object. I guess they know tennis better." 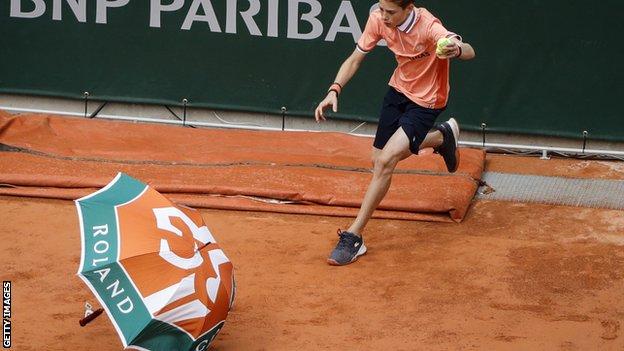 The world number one looked increasingly frustrated on Saturday, getting a warning for exceeding the 25 seconds allowed to take a serve and then speaking angrily with the umpire after losing the third set.

As soon as the players returned to court after the third interruption, a close line call gave Thiem break point and prompted another discussion between Djokovic and the umpire.

Thiem lost in straight sets to Nadal in last year's final, but has long been heralded as a future Grand Slam champion - with the French Open seemingly his best chance on his favoured surface.

The final may go differently this year as Thiem has a new coach having started working with Chilean Olympic gold medallist Nicolas Massu three months ago.

Thiem, who was playing his fourth semi-final at Roland Garros, can also take confidence from his win against Nadal on clay at the Barcelona Open in April.

The world number four went on to win his 13th tour title at the tournament and reached the semi-finals in Madrid in May before losing to Djokovic.

The French Open is Thiem's most successful Grand Slam. He reached the US Open quarter-final in 2018 but has never made it past the fourth round at Wimbledon or the Australian Open.

393 comments
Back to top
unknown