Kevin Anderson is in a strong position to qualify for the semi-finals after beating Japan's Kei Nishikori 6-0 6-1 to claim his second ATP Finals win.

The South African, 32, comfortably won the first set to love in just 32 minutes at the O2 Arena in London.

Anderson, ranked sixth in the world, broke again early in the second set and led 6-0 5-0 before Nishikori finally held serve.

Nishikori had beaten an out-of-sorts Roger Federer 7-6 (7-4) 6-3 on Sunday but could still qualify for the last four despite a defeat that equalled his heaviest on tour since 2008 against Robin Soderling.

Anderson all but through

After beating a frustrated Federer on Sunday, Nishikori should have been full of confidence going into this match.

But instead it was Anderson who came out firing, taking the advantage with his third break point on Nishikori's first service game.

From that moment on, the Japanese 28-year-old was second best as Anderson converted five of his 12 break points - Nishikori did not have any.

Wimbledon finalist Anderson won 66% of the total points and afterwards told BBC TV it was "one of the best matches I have ever played".

"I found great rhythm from the start," he added. "You wait a whole year to play a match like this - to do it here feels fantastic."

Should Anderson beat Federer in his final group match on Thursday, he will qualify for the semi-finals as winner of the group.

Before the match, Anderson's wife Kelsey tweeted that for every ace the South African served against Nishikori he would donate $100 (£77) to the the rescue effort in California where fires have killed 42 people.

He served five aces in each set - while Nishikori managed just two in total - meaning Anderson will donate $1,000 to the Los Angeles Fire Department. 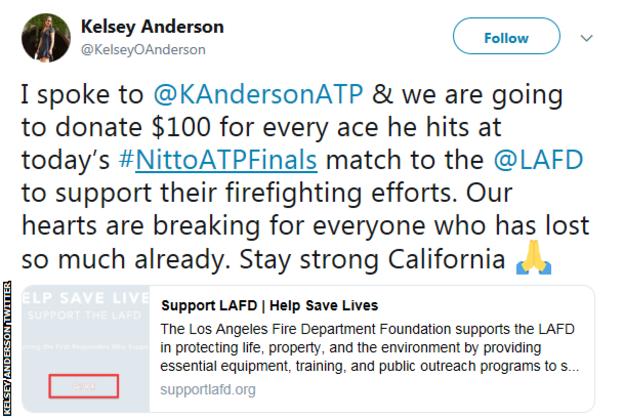 'It was a humiliation' - analysis

Given a match of this nature, it can't be easy for Nishikori to bounce back. He's a top-10 player. It is a humiliation. It is going to take a good job from his team to put this out of his mind and focus on the next one.

I don't think anyone saw this coming. It is incredible how well Anderson moved and how cleanly he struck the ball. He never gave anything for Nishikori to get involved in.

He served at nearly 80% on his first serves, was serving in the mid 130s (mph) and he lost only five points behind the first serve - it was an absolute clinic.