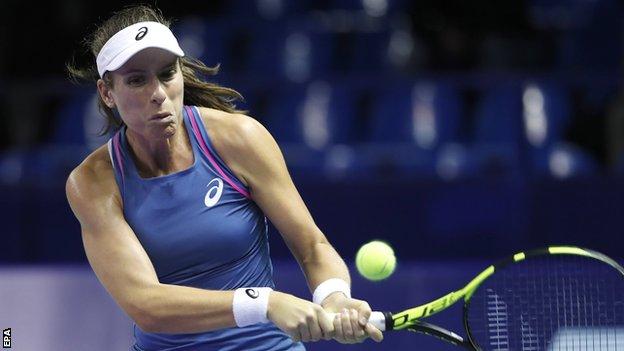 British number one Johanna Konta's season ended when she lost in the Kremlin Cup semi-finals to Russian sixth seed Daria Kasatkina in Moscow.

Konta was aiming to make her second WTA final of a difficult season but lost 6-4 6-3 in Friday's semi-final.

After struggling for form and dropping out of the world's top 40, the 27-year-old has been working with prospective new coach Dimitri Zavialoff in Russia.

She responded by reaching the last four and tested Kasatkina before fading.

Victories against Elise Mertens, Daria Gavrilova and Aliaksandra Sasnovich - all above 44th-ranked Konta in the world - look to have boosted the Briton's confidence after a disappointing season which led to her splitting with coach Michael Joyce last week.

And there were further positive signs - particularly in a tight opening set - for Konta to take, despite defeat by 21-year-old Kasatkina, who is ranked 14th in the world and considered one of the brightest talents on the WTA Tour.

Konta saved four set points at 5-2 down in the opener and broke back in the next game for 5-4 - after Kasatkina had saved three break points - when the 21-year-old double faulted.

However, Konta could not build on that momentum. She lost her serve again in the next game as Kasatkina took the opener having won just one more point than her opponent.

The former Wimbledon semi-finalist made an encouraging start to the second set by breaking Kasatkina's serve, only for the Russian to take control and move 4-1 ahead as Konta's aggressive baseline game began to lose its effectiveness.

The Briton saved a match point at 5-2 but Kasatkina held serve in the next game to reach the Moscow final for the second successive year.