Australian Nick Kyrgios fought back to beat Pierre-Hugues Herbert at the US Open after an apparent pep talk from the umpire.

The world number 30 was trailing 6-4 3-0 and threatening to quit the second-round match when Mohamed Lahyani climbed down from his chair, saying he wanted to "help" him.

Herbert said Lahyani should be punished as his actions were not "appropriate".

"I think this was not his job. I don't think he's a coach, he's an umpire, and he should stay on his chair for that," the Frenchman said.

"If he makes a mistake, I think he should be also punished. He doesn't make that many mistakes, and I think he's a really good umpire."

Kyrgios, 23, won 19 of 25 games after the exchange and the incident sparked huge debate online.

The Australian said he was not feeling well because of the heat in New York and asked for some salts to help him feel better.

In an earlier statement, the USTA said Lahyani left his chair to check on Kyrgios's condition because he could not hear him properly and was concerned the player might need medical attention.

"He also informed Kyrgios that if his seeming lack of interest in the match continued, that as chair umpire, he would need to take action," it added.

Kyrgios, who has been involved in a number of controversial incidents in recent years, said Lahyani's input had "no effect at all" on him.

What did Lahyani say?

Television microphones were unable to pick up the full conversation, although Lahyani could be heard telling Kyrgios: "I want to help you. This isn't you. I know that."

Kyrgios said Lahyani was not telling him to play better, adding it was "ridiculous" to suggest the umpire was coaching him.

"If I was up a set and 3-0, and my opponent was getting that talk from Mohamed Lahyani, obviously an unbelievable tennis player, I wouldn't care less," Kyrgios said sarcastically.

"Obviously you know he's achieved a lot in his tennis career. Mohamed, he had a big one." 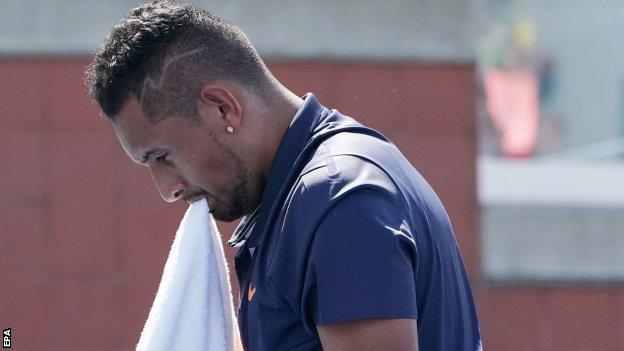 Something changed from that point - Herbert

Herbert, ranked 75th in the world, said he was mainly upset with himself for not closing out the second set after going a break up with Kyrgios "not playing".

"I had the feeling he was not giving 100%, not focused. For sure from that point something changed. He got better and better until the end," Herbert said.

"The umpire doesn't have to talk to him at all. The only thing he can tell him is pay attention, because if you continue like this, I'm going to give you a warning.

"He doesn't need to say the words he said on the video."

He later released a statement saying he was angry with the umpire but "even more upset" with the statement from the USTA "which is clearly taking us for fools".

Conversations can change your mindset - Federer

Later, 20-time Grand Slam champion Roger Federer said he believed Lahyani's actions would have had an effect on any player.

"It is not the umpire's role. But I understand what he was trying to do," added the Swiss great.

"He was there for too long. It's a conversation. Conversations can change your mindset. It can be a physio, a doctor, an umpire for that matter."

The incident is the latest in a string of controversies to surround Kyrgios, who at his best has the talent to beat the world's top players but at his worst can appear petulant or disinterested.

July 2015: Kyrgios loses to Richard Gasquet at 2015 Wimbledon by 'not trying'

October 2016: Kyrgios claims he was 'bored' and criticises fans in Shanghai Masters win

July 2018: Kyrgios tells Bartoli to 'stop assuming' after she labels him 'pathetic'