Twenty years since their first meeting at a Grand Slam, sisters Venus and Serena Williams will face each other for a place in the US Open last 16.

The pair meet in Friday's night session, from 00:00 BST, on Arthur Ashe Stadium at Flushing Meadows.

"At least this time it will be fair," laughed Venus, referring to last year's Australian Open final when Serena was pregnant with daughter Olympia.

"The last time we played [in a Grand Slam] it was two against one."

This will be their 30th meeting - Venus won the 29th at Indian Wells in March - and the earliest they have faced each other at a major since that initial match two decades ago.

The siblings have gathered a combined 30 Grand Slam singles titles since Venus won that second-round match at the Australian Open in 1998.

"It's obviously a tough match. It's so young in the tournament," said Serena.

"It's not the end of the world. We would have rather met later but we're both going to come out per usual and do our best.

"We make each other better. We bring out the best when we play each other. I think we're used to it now."

The Wimbledon finalist, 36, boasts a 17-12 record over her elder sister and has beaten her in seven of eight major finals since Venus won the 2001 US Open showpiece.

"I never root against her, no matter what," added Serena.

"So I think that's the toughest part for me. When you always want someone to win, to have to beat them. I know it's the same thing for her."

Sixteenth seed Venus, 38, beat Svetlana Kuznetsova and Camila Giorgi to reach the third round, while Serena, seeded a position lower, knocked out Magda Linette and Carina Witthoft without dropping a set. 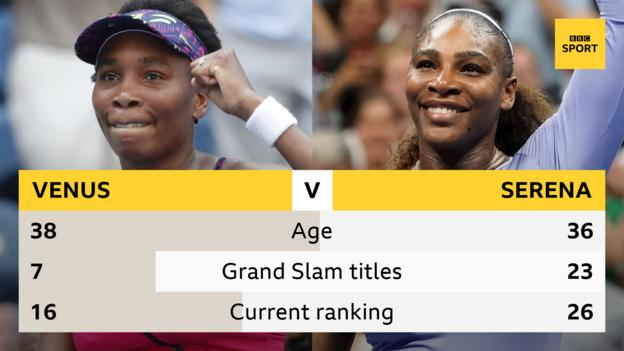 2003 Australian Open final: Serena won her first Australian Open to become the first woman since Steffi Graf in 1994 to hold all four Grand Slams at once, but it was a fourth loss on the bounce in a major final for Venus.

2009 Wimbledon final: A runner-up to her sister the year before, Serena stopped Venus from winning three Wimbledon titles in a row by claiming her first SW19 crown in six years.

2017 Australian Open final: The last time the siblings met at a major. Serena, who later revealed she was pregnant at the time, won an Open-era record 23rd Grand Slam.

In the women's draw, top-10 seeds Karolina Pliskova and Elina Svitolina are both in action, against American Sofia Kenin and China's Qiang Wang, respectively.