Britain's Andy Murray faces big-hitting Fernando Verdasco as he attempts to reach the third round of the US Open on Wednesday.

The 31-year-old plays the Spanish 31st seed in the second match on Arthur Ashe Stadium at about 19:00 BST.

Murray said: "Fernando is a great shot-maker and someone, that when he's on his game, is really tough to beat."

Verdasco said: "I need to treat it like any other meeting, it won't change just because he has been injured. Hopefully, Wednesday is going to be a good day for me."

Murray, the 2012 US Open champion, has won 13 of his 14 meetings with Verdasco but had to come from two sets down to beat him in the 2013 Wimbledon quarter-finals. 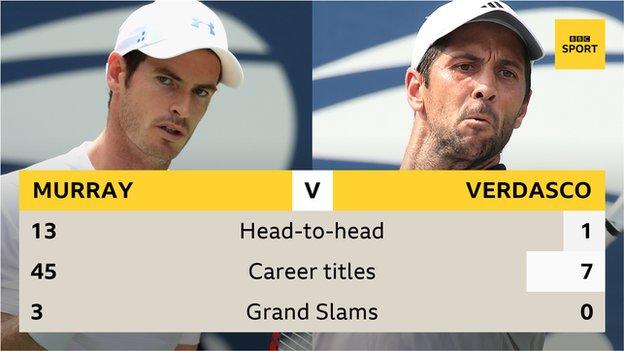 Norrie, who beat Jordan Thompson in his opening match, has enjoyed a rapid rise up the rankings since turning professional in spring 2017 and is now up to 67 in the world.

Norrie, who is based at his former college in Texas, USA, is hoping use his prize money to buy a London flat.

He joked of the property prices: "I'll probably have to make the semis here. Maybe [I'll need to] win it for Putney or Wimbledon."

As they did on Monday, defending men's champion Rafael Nadal and six-time women's champion Serena Williams feature in the night session on Arthur Ashe Stadium.

American Williams, seeded 17th, faces German Carina Witthoeft at 00:00 and will be followed by Nadal's match against Canadian Vasek Pospisil.

Defending women's champion Sloane Stephens opens proceedings on the main court at 16:00 against Ukraine's Anhelina Kalinina, with Murray straight after.

If both Williams sisters win, they will meet in the third round.