In the end, it was a straightforward Wimbledon men's singles final victory for Novak Djokovic, but it followed a lengthy battle back to the top.

The Serb is now one behind American great Pete Sampras in terms of Slam titles, with contemporary rivals Rafael Nadal (17) and Roger Federer (20) out in front and still in the form to win more.

After two years of injuries and personal issues, is Djokovic once again ready to challenge the duo for the right to be called the greatest male player of all time?

Boris Becker, three-time Wimbledon champion and his former coach, ex-British number one Tim Henman and Patrick Mouratoglou, the coach of 23-time Grand Slam champion Serena Williams, give their takes on the Djokovic renaissance.

German Becker coached Djokovic between 2014 and 2016, during which the Serb won six Grand Slams

Novak comes across as very cool, but beneath is a soft heart.

His family is his foundation, his cornerstone - he has been with his wife Jelena for more than 10 years, and they've been through thick and thin.

Is he shown the same respect as the big two? Probably not. We all love Roger and we all love Rafa, but it seems we "respect" Djokovic.

That's something that bothers him. He wants to be on the same level, but it's something you can't buy. He's playing in an era with two of the most beloved sportspeople in the world. That's the situation but he has to deal with it. Fans aren't against him though.

However, he takes it all personally, that's his character - he's sensitive.

I don't think Djokovic expected to win another Wimbledon after two years of not being close. When he started this year he just wanted to be healthy and play, he wasn't thinking of winning. During the clay season he was happy to just win a match. It was only at Queen's, when he went to the final, he started to believe there was something left.

Regarding the future, Novak is super fit and very dedicated. He studies the history books and knows Nadal and Federer have more Grand Slams, though he won't bring it up in conversation. He can play for two or three years more and win a few more majors - starting with the US Open.

'Djokovic is back in the equation' 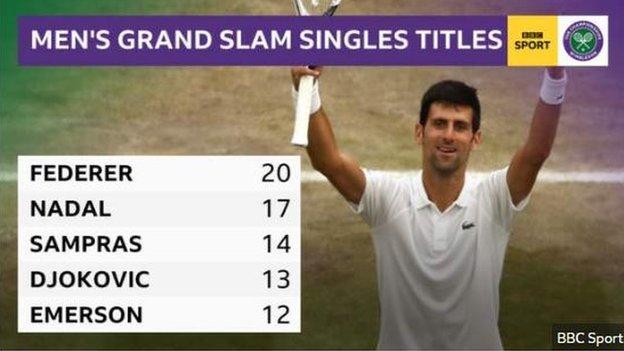 The crowd are well educated and know what's going on in the tennis world - they know he's had a difficult two years, emphasised by how his ranking dropped from world number one to 21.

There has been a gap between winning Grand Slam titles, but this is number 13 and there's no doubt with his renewed passion and hunger he will add more. The level of play he's shown of late suggests he's back to his best.

And looking into the future, you think of Novak's physique. He isn't carrying excess weight and he doesn't put undue pressure on his knee, hips and lower back joints. He can go on many years.

It's amazing to think that Roger, with 20 Grand Slam titles, is still in danger of being overtaken.

This Wimbledon win definitely brings Novak back into the equation, although some would say he's too far back.

It's his mindset - that's why he is back to where he is. It wasn't the real Novak on the court during the past two years

It seems to have all come together for him during the past month, starting with reaching the French Open quarter-finals. You saw the fighting spirit was back.

Novak never lost his game, he just lost his feel for the competition. - maybe it was his motivation.

These things come from the mind. The champions don't think like the regular players. There is a huge difference between both.

When Rafa and Roger were winning everything, a new guy came along and became the top dog - that was Novak and that was because he is a champion. Others have tried, but they don't have the same mentality.

Novak is in good physical shape and can play for a few more years. He dominated when Rafa and Roger played their best tennis, so he can dominate again.